The pieces were all in position, the stakes were set, and the drama had reached a fever pitch.  Everything was ready for a dramatic showdown in the midseason finale, and that’s just what we got.  The rules have been changed, and going forward nothing will be the same.  Characters died, mysteries were solved, new questions were asked, and things set off in entirely new directions for the rest of the season.  In short, this was a big, exciting, important episode for SHIELD, one that delivered on the promise of season two thus far in almost every way imaginable.  So without any further ado, let’s find out “What They Become”, written by Jeffrey Bell and directed by Michael Zinberg.

END_OF_DOCUMENT_TOKEN_TO_BE_REPLACED

With only a week to go before the midseason finale, things are really heating up on SHIELD.  Our last episode helped position the pieces for the endgame of this half of the season, and this week’s episode gave us what felt like part 1 of the finale.  This week had it all, with dream sequences ripe for fanfiction, fight sequences, possessed characters, two Melinda Mays, two Koenigs, the return of Raina, and some confirmation of a popular theory.  It’s all building up to an exciting midpoint next week, before SHIELD takes an extra-long break while Agent Carter gets a chance in the spotlight (I’ll be recapping Agent Carter as well).  So let’s jump into “…Ye Who Enter Here”, written by Paul Zbyszewski and directed by Billy Gierhart, and let’s do it quick before my local TV station cuts in with a random commercial at the worst possible time.

END_OF_DOCUMENT_TOKEN_TO_BE_REPLACED

Things are starting to move quickly on Agents of SHIELD.  Last week saw the solution to the mystery of Coulson and the alien writing, even if it left many more questions in its wake, and this week’s episode continued along that path, providing some new revelations and lots of momentum heading towards the midseason finale.  Skye’s father played a big role tonight, as did the confrontation between Ward and his brother, and we finally got some answers about Whitehall.  Not to mention some mortal peril, humor, sex, and possibly the goriest sequence we’ve seen on the show yet.  And to top it all off, Agent Carter made another welcome appearance!  Things are definitely coming to a head with only two episodes left before SHIELD goes on its winter break, and I for one am as excited for the show as I’ve ever been.  So let’s jump into “The Things We Bury,” written by DJ Doyle and directed by Milan Cheylov.

END_OF_DOCUMENT_TOKEN_TO_BE_REPLACED 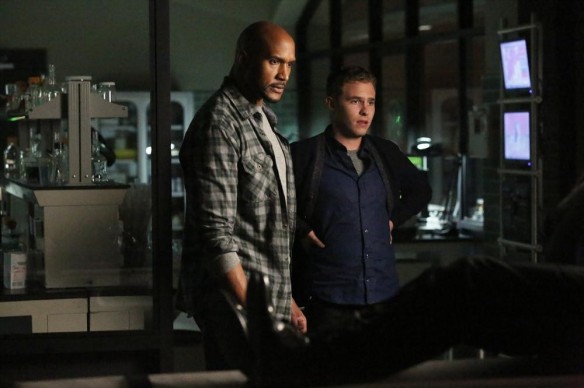 Agents of SHIELD took a week off and returned with an exciting episode that took a big step forward for some of the big story arcs of the season.  The last episode moved some of the key pieces around but this week gave us some big forward momentum along with a healthy dose of revelations, with presumably more to come.  We learned some new information about the Guest House, the alien, and TAHITI, not to mention a solution to the alien writing puzzle.  Ward got to stretch his wings, setting out on a plan that kept me guessing throughout the whole episode.  In all, it was a fast-paced episode that set the ball rolling for the second half of the first half of season two (the second quarter?) going into the winter.  So let’s jump into “The Writing on the Wall,” written by Craig Titley and directed by Vincent Misiano.

END_OF_DOCUMENT_TOKEN_TO_BE_REPLACED

After last week’s tense, exciting episode, it would have been tough for Agents of SHIELD to try to match that level of intensity.  The standoff between Raina and Coulson, with Simmons’ life hanging in the balance, combined with some new and emotional revelations about Skye’s father, would have been a tough act to follow.  Wisely, SHIELD charted a different course this week, giving us one of those all-important connect-the-dots episodes, that helps position the pieces for bigger things to come.  And while it might have been a slight but inevitable let down, it still packed in some great moments both fun and emotional, while setting up one big game changer that will affect how the rest of the season plays out.  So let’s take a look at “A Fractured House,” written by Rafe Judkins and Lauren LeFranc and directed by Ron Underwood.

END_OF_DOCUMENT_TOKEN_TO_BE_REPLACED 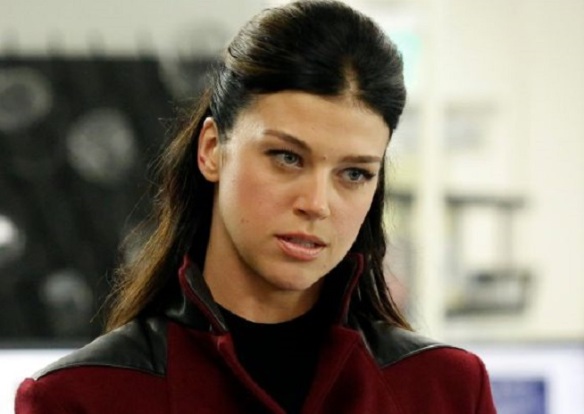 I hope you’ve got your lanyards handy, because Agents of SHIELD got serious again this week.  Last week’s episode was all fun and action (and Philinda), but this week was drama, suspense, and emotional moments.  While last’s week was more of a standalone episode, giving us some small progress but not doing much to advance the plot, this week took some major steps forward.  We didn’t get any concrete answers to the show’s main mysteries, but they did shake up the status quo quite a bit.  Simmons undercover experience with HYDRA came to a head, and Coulson’s secrets are becoming less secret.  We learned more about the Doctor, none of which sounds good, and Raina was put in a tough position.  Oh, and there’s Bobbi Morse, who is the best.  So let’s dive right into “The Hen in the Wolf House,” written by Brent Fletcher and directed by Holly Dale.

END_OF_DOCUMENT_TOKEN_TO_BE_REPLACED 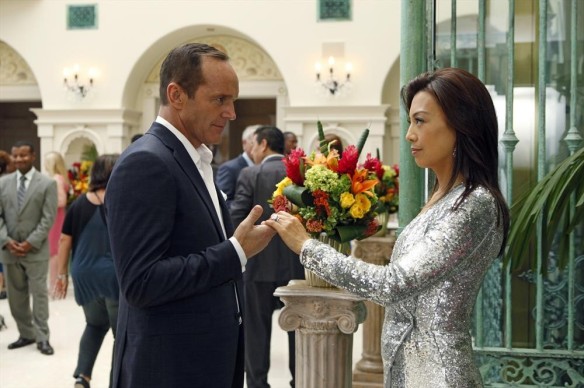 This week’s Agents of SHIELD episode was both the funniest and had the best action of any episode thus far this season.  Last week finally told us what Simmons has been up to along with giving us some truly fantastic Fitz moments.  This week took the focus away from the “kids” of the show and put it squarely on mom and dad, as May and Coulson set off on an undercover assignment to retrieve a mysterious painting.  We got some seriously kickass moments from both May and Coulson, a lot of humor, and even some sweetness, in what proved to be a nice change of tone from the previous three episodes this season, all of which have been rather serious.  So let’s jump right into tonight’s episode (while keeping an eye out for laser grids), “Face My Enemy”, written by Drew Greenberg and directed by Kevin Tancharoen.

END_OF_DOCUMENT_TOKEN_TO_BE_REPLACED 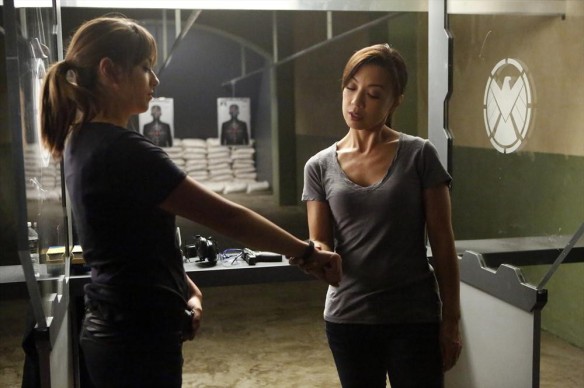 Agents of SHIELD keeps putting out great episodes this season.  Last week’s wrap-up to the season premiere was a great one, giving us some solid character development while helping to feed some of the key mysteries that have been set up for this season.  This week, the mysteries and the Obelisk were set aside as we finally learned what Simmons has been up to.  We also got some stellar acting from Ian De Caestecker, who is the MVP of season 2 thus far, and a look at how all of our characters have changed and progressed since last season, and how the family dynamic of the team has shifted.  We also saw the return of one of last season’s dangling threads, perhaps setting the stage for more returning characters from last year.  So without further ado, let’s jump into “Making Friends and Influencing People” written by Monica Owusu-Breen and directed by Bobby Roth.

END_OF_DOCUMENT_TOKEN_TO_BE_REPLACED

After last week’s episode got season 2 of Agents of SHIELD off and running at a fast pace, the latest episode continued right where we left off with another exciting installment.  “Heavy is the Head” gave us some solid character development, it wrapped up some of the loose threads from last week, and it helped to set the stage for the coming season.  We got the addition of a new villain, allied with a returning character from last year, plus a deeper look at the new additions to our band of heroes.  And perhaps most importantly of all, we got the return of some humor to the show, for which the action last week left little time.  (Though I imagine that people are most interested in discussing the preview for next week’s episode, which we’ll get to at the end of the recap.)  In all, this episode felt like the second half of a two-hour premiere, and gave the team and the show a solid base to build on for the next 20 episodes.  So let’s dive right in to “Heavy is the Head,” written by Paul Zbyszewski and directed by Jesse Boncho.

END_OF_DOCUMENT_TOKEN_TO_BE_REPLACED

Ladies and gentlemen, Agents of SHIELD is back!  It’s got a new timeslot, a bunch of new faces, a new enemy, and a new group dynamic, but SHIELD’s mission hasn’t changed.  The events of Captain America: The Winter Soldier may have changed everything for Coulson and his team last season, but they’re still out to protect people, even if they may not have the seemingly endless resources of last year.  Coulson’s trying to rebuild SHIELD from the ground up as its new director, which means making deals with some shady characters and making harder decisions than he ever has before.  Tonight’s episode gave us our first look at how this new version of SHIELD will play out, setting the stage for some season-long arcs while delivering some solid action, new superpowers and connections to the Marvel universe, and hints to larger mysteries, a tease for Agent Carter, and a good helping of drama.  So let’s jump right into “Shadows,” written by Jed Whedon and Maurissa Tancharoen and directed by Vincent Misiano.