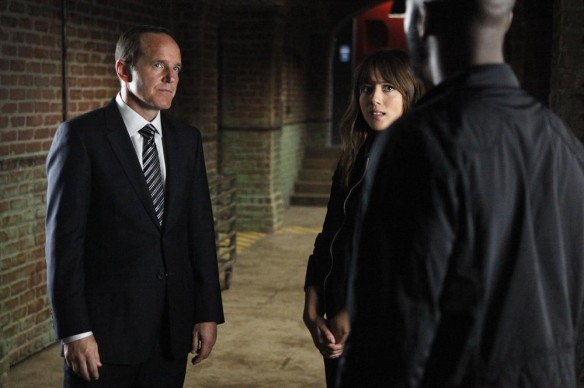 After last week’s episode got season 2 of Agents of SHIELD off and running at a fast pace, the latest episode continued right where we left off with another exciting installment.  “Heavy is the Head” gave us some solid character development, it wrapped up some of the loose threads from last week, and it helped to set the stage for the coming season.  We got the addition of a new villain, allied with a returning character from last year, plus a deeper look at the new additions to our band of heroes.  And perhaps most importantly of all, we got the return of some humor to the show, for which the action last week left little time.  (Though I imagine that people are most interested in discussing the preview for next week’s episode, which we’ll get to at the end of the recap.)  In all, this episode felt like the second half of a two-hour premiere, and gave the team and the show a solid base to build on for the next 20 episodes.  So let’s dive right in to “Heavy is the Head,” written by Paul Zbyszewski and directed by Jesse Boncho.

END_OF_DOCUMENT_TOKEN_TO_BE_REPLACED

*Update: My full recap of “Heavy is the Head” is now live.  Read it here!

Tonight’s episode of Agents of SHIELD picked up right where last week’s episode left off.  In fact, in many ways it was almost as if the season premiere was split in half, and tonight was merely part two of an extended beginning.  We got some (temporary) resolution to the Creel/Absorbing Man plot, spent more time with this season’s newest cast member, and the stage was set for the larger movements of the plot going forward.  We got to see progression on some of the character arcs that were started last week, while some others were left out, and we saw the reappearance of a familiar face from last year along with the introduction of a new threat to SHIELD.  In all, it was a great followup to last week, and I can’t wait to see what’s in store going forward.  Here are my instant reactions to “Heavy is the Head,” and I’ll update this post with a link to my full episode recap once it’s finished.