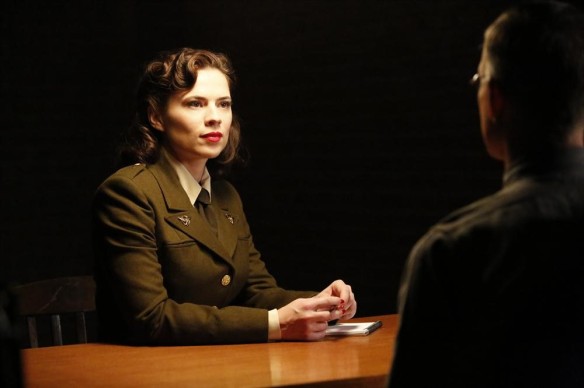 Things are starting to move quickly on Agents of SHIELD.  Last week saw the solution to the mystery of Coulson and the alien writing, even if it left many more questions in its wake, and this week’s episode continued along that path, providing some new revelations and lots of momentum heading towards the midseason finale.  Skye’s father played a big role tonight, as did the confrontation between Ward and his brother, and we finally got some answers about Whitehall.  Not to mention some mortal peril, humor, sex, and possibly the goriest sequence we’ve seen on the show yet.  And to top it all off, Agent Carter made another welcome appearance!  Things are definitely coming to a head with only two episodes left before SHIELD goes on its winter break, and I for one am as excited for the show as I’ve ever been.  So let’s jump into “The Things We Bury,” written by DJ Doyle and directed by Milan Cheylov.

We open with another flashback to Austria, 1945.  Whitehall, surrounded by men in lab coats with clipboards, is talking to a frightened man sitting at a table, on which sits the Diviner.  Whitehall tells the man that it’s beautiful, but “Your group was digging in the ground at night, how you found it is a mystery.”  The man replies that they’ve heard the same stories as him, to which Whitehall replies that they’ve both searched a long time for something they barely understand.  He tells the man that he can touch the Diviner if he’d like to, which he hesitantly does.  As soon as his fingers close around it they start to blacken, and it spreads over his entire body, killing him and sending him toppling to the floor, looking as burnt as the others.  Whitehall observes to a scientist with a stopwatch that the Diviner worked quickly this time.  He observes that gender and race don’t seem to be a factor on the Diviner’s effects, telling them to put the dead body with the others and bring in the next subject.

The next subject is a familiar face to Joss Whedon fans, as she’s played by Dichen Lachman (Sierra/Priya from Dollhouse).  Whitehall tells her not to be afraid, and that she should feel free to pick the Diviner up and examine it.  As she considers it she looks to the floor and notices the previous man’s burnt finger, which must have fallen off as he was dragged from the room.  She says, “No, please don’t,” in Chinese as two men grab her and force her face towards the Diviner.  “Discovery requires experimentation,” Whitehall says, and as her face touches the Diviner it lights up, displaying the alien writing as it did for Raina.  “What makes you so special?” Whitehall asks, before instructing the scientists to prepare her for surgery.  “We must examine exactly what makes her tick.”  A soldier comes in, addresses Whitehall by a different name, and tells him that Red Skull has fallen and is dead, and that the allies are approaching.  “The world has lost a great mind,” Whitehall says, and tells the scientists to put the woman in a cage so they can unravel the mystery later.  “Discovery requires experimentation,” he says again, “and this experiment will take time.”

Speaking of time, we jump forward to the present, where Whitehall, minus the Nazi uniform and German accent, is once again talking to scientists.  “With all of modern science and millions of dollars at your disposal, these are your results?” he asks, disappointed.  “I’ve had this information for decades.”  He grudgingly decides that they need to bring “him” in, and Skye’s father is led in.  Whitehall says that this is his chance to prove his claim of being an expert on the Diviner, and the Doctor says that it’s no surprise that HYDRA hasn’t learned anything about it, as they’ve been scratching and clawing at it like a monkey.  He makes a move forward and all of the HYDRA agents in the room draw their guns on him.  Whitehall points out that everyone’s a little jumpy following Bakshi’s disappearance.  He tells the Doctor to tell them what he knows, as they have “yet to figure out this weapon.”  The Doctor calls Whitehall small minded for simply thinking of it as a weapon.  He says it’s a key, and while it can kill it only does so to protect itself from those it divines, “hence the catchy name,” to be worthy.  They have to be worthy of unlocking its power, and it’ll do something, scientifically speaking, much much cooler than merely killing if a special person takes it to the city.

“I’m unclear on how I’m stuck running the base and you’re off to Hawaii,” May says to Coulson on the communications screen in the Bus.  She asks why they’re not going after Ward, but Coulson tells her that Christian Ward has deemed SHIELD to be “politically toxic,” and has demanded that they stay away.  Still, he’s going to keep some assets on alert just in case.  Meanwhile May has Bobbi interrogating Bakshi back at the Playground, and as she signs off she sarcastically tells Coulson, “Aloha.”  Skye walks in, and wonders at the fact that Coulson isn’t interrogating Bakshi himself.  “It’s my job to keep an eye on the big picture,” he replies.  When she asks about where they’re going, he says he’s been thinking about Nick Fury, who could always see five steps ahead, “which, for a one-eyed man, is impressive.”  He wants to be waiting at the finish line when HYDRA gets there, as he knows that the Diviner is going to lead HYDRA to the city.

Bobbi’s finally gotten Bakshi to start talking, but he mostly just spouts HYDRA catchphrases, prompting Bobbi to tell him that she’s read the HYDRA pamphlet before.  She tells him that if he’s going to talk he might as well say something of value, and that he might as well keep silent if he has not thoughts of his own.  She asks him what it’s like to work for someone so boring.  Hunter and Mack are watching Bobbi chip away at Bakshi on a monitor, and Hunter says, “It’s nice to watch someone else suffer for a change.”  Mack, however, is more interested in discussing current events, wondering if he’s talked to anyone about the happenings of the last week.  Hunter doesn’t seem concerned about what Coulson went through, but Mack insists that he didn’t see what Mack saw, that Coulson was violent and out of his mind, and the aliens have been messing with his head.  Hunter thinks Coulson seems alright, but they’re interrupted by Simmons walking in.  She observes that Bakshi almost killed her a few times, and Mack invites her to pull up a seat to watch the fun.  She marvels at how Bobbi can keep a cool head and treat the guy nicely, as she’d rather see his head bashed in, though “that would be wrong, wouldn’t it?”  Hunter says that Bobbi can pretend to like anything, which conjures up all sorts of possibilities from their marriage.

Bobbi tries to charm Bakshi, saying that he’s more like a Bond villain than boring old Whitehall, and wonders why Bakshi isn’t leading instead.  He says that he’s more worried about the long game, but she suggests that he might have been brainwashed.  He insists that Whitehall is a disciple of Red Skull and part of a grand history.  “Whitehall will see your friends turned to stone, those who haven’t already.”  Bobbi heads outside to talk to the group, saying that he could be brainwashed but she doesn’t think it’s likely, although any HYDRA member could have been and not know it.  “Yes, anyone,” insists Simmons, before adding “oh” as she realizes what she’s saying.  (More fuel for the “Simmons was brainwashed” theory, or just a red herring?)  There definitely seems to be a connection between Whitehall and Red Skull, though given Whitehall’s apparent age no one can figure it out.  However, the Playground used to be an SSR base and is full of files that might be of use to help them know their enemy.

We catch up with Christian Ward, who doesn’t seem particularly concerned about recent events.  His guards have driven him to a house in the woods as he talks to his wife on the phone, telling her that he won’t make it home that evening.  He hangs up and immediately calls his mistress to say that his evening is wide open and that everything has been set up at his family’s summer place.  He asks if she got his present yet, and tells her that it’s supposed to be see-through.  His window shatters and he’s pulled from the car and toss down a hill by Grant Ward, who’s already killed Christian’s guards.  “Hey, big brother,” he says with a smile, “I heard you were looking for me.”

The Bus lands in Hawaii, but when Coulson comes out and spots Skye and Trip checking their guns and gearing up he asks, “What are we gonna do, storm Oahu?”  He tells them to ditch the guns and hands Skye a watch.  He tells her to take it to a particular watch repair place, where it needs the inscription “Dearest Darren, I count the seconds we’re apart.  Love, your island flower.”  She asks if there are any other instructions and Coulson says, “If it starts to leak any fluids, drop it and run.”  “This does not sound like a watch!” she says, holding it gingerly at arm’s length.  Coulson hands Trip a button and tells him to take it to a dry cleaner whose Hawaiian name is incomprehensible to Trip, warning him not to confuse it with the one on a similar sounding street.  “Am I good with this in my pocket?” Trip asks, sliding it in his jeans.  “That depends,” Coulson replies, “do you ever want kids?” causing Trip to remove the button from his pocket.  As he and Skye head off, Coulson tells Trip to remember to bring back the blue tie and reminds them that they only have 40 minutes.  Fitz walks up and asks if there are any orders for him.  Coulson hands him a transceiver that will have to be hooked up in under six minutes.  Fitz reminds him that he only has one working hand, which Coulson says is why Fitz is going to practice it over and over until he can do it.

Bobbi is considering Bakshi and how best to break him, and while she does she twirls her fighting staffs to help her think.  Hunter comes in to talk to her, and she relates everything she thinks she’s learned about him.  He grew up on the street and tries to hide it, but hasn’t quite perfected his accent.  He was in the army but washed out, and at some point in the past he crossed Whitehall but was given a second chance.  May and Simmons, meanwhile, are going through SSR files.  Simmons uncovers the original 0-8-4 file signed by Agent Carter, which she’s fangirling over but which doesn’t impress May.  “Peggy Carter?  SHIELD’s founder?  Happened to be British? Held this in her hand?” she says, bubbling with excitement, but May wants to find information on Red Skull.  The only thing they find is a reference to someone named Werner Reinhardt who was captured by SSR, but his file seems to be missing.  May goes over the wall and opens a secret compartment, revealing a key labeled “B”.  She says that Vault D, where they kept Ward and are now keeping Bakshi, isn’t the only vault, and that Carter buried a lot of things there.