Mal: Hey. Stay with me, Shepherd.

Mal: That’s good. You lie there and be ironical.

Jayne: Yah! Get along!

Mal: You know, they walk just as easy if you lead ’em.

Book: Hope this corral’s strong enough to hold them. “Shepherd’s” a purely figurative title, you know.

Zoe: Next time we smuggle stock, let’s make it something smaller.

Wash: Yeah, we should start dealing in those black-market beagles.

Jayne: We was just about to spring into action, Captain. Complicated escape and rescue op.

Wash: I was going to watch. It was very exciting. 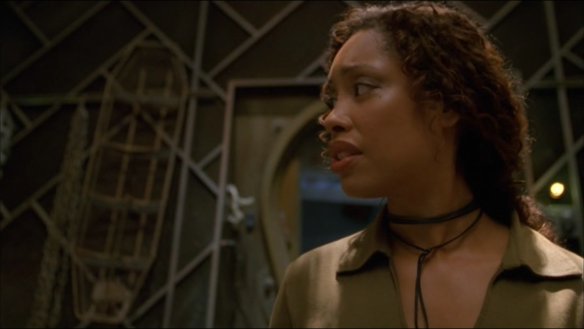 Simon: Captain’s a good fighter, he must know how to handle a sword.

Zoe: I think he knows which end to hold.

Jayne: You know what the chain of command is? It’s the chain I go get and beat you with until you understand who’s in ruttin’ command here. Now we’re finishing this deal, and then maybe… maybe we’ll come back for those morons who got themselves caught. You can’t change that by getting all… bendy.

Jayne: You’ve got the light.. from the console.. keep you… lift you up. They shine like… little angels… (collapses)

Wash: Did he just go crazy and fall asleep?

Simon: I told him to sit down.

Kaylee: You doped him.

Simon: It was supposed to kick in a good deal sooner. I, I just didn’t feel comfortable with him in charge. I hope.. hope that’s all right.

Mal: Well what about you, Shepherd? How come you’re flying about with us brigands? I mean, shouldn’t you be off bringing religiosity to the fuzzy-wuzzies or some such?

Mal: Still a little whimsical in the brainpan. Seems calm enough though.

(River throws stuff in the background)

Inara:You should really have the young doctor look at this.

Book: I didn’t say that… Is this what life is, out here?

Book: I’ve been out of the abbey two days, I’ve beaten a lawman senseless, I’ve fallen in with criminals. I watched the captain shoot the man I swore to protect… And I’m not even sure if I think he was wrong.

Book: I believe I just… I think I’m on the wrong ship.

Inara: Maybe. Or maybe you’re exactly where you ought to be.

Inara: So. Would you like to lecture me on the wickedness of my ways?

Book: I brought you some supper, but if you’d prefer a lecture, I’ve a few very catchy ones prepped. Sin and hellfire… one has lepers.

Kaylee: You’re gonna come with us.

Kaylee: You like ships; you don’t seem to be lookin’ at the destinations. What you care about is ships, and mine’s the nicest.

Kaylee: Oh, she’ll fool ya. You ever sail in a Firefly?

Book: Long before you were crawlin’. Not an aught-three though, didn’t have the extenders, tended to shake.

Kaylee: So, uh, how come you don’t care where you’re going?

Book: ‘Cause how you get there’s the worthier part.

Kaylee: Are you a missionary?

Book: I guess. I’m a Shepherd from the Southdown Abbey. Book, I’m called Book. Been out of the world for a spell, like to walk it a while. Maybe bring the Word to them as need it told.

Kaylee: Well I’m Kaykee, and this here’s Serenity. She’s the smoothest ride from here to Boros for anyone can pay… Can you… pay, or…

Book: Well, I got a little cash, and, uh… (opens box for Kaylee)