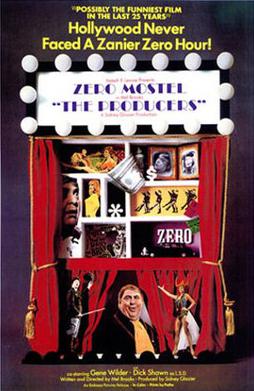 This post is part of the Backstage Blogathon, hosted by Movies Silently and by Sister Celluloid, focusing on the various ways the entertainment industry portrays itself on film.

I’ve long been a fan of all things Mel Brooks, and I have a particular fondness for The Producers. Brooks’ first film, which earned him his only Academy Award, isn’t as brilliantly funny as Blazing Saddles or Young Frankenstein, nor as specific a parody as Spaceballs or Robin Hood: Men in Tights. Nevertheless, it’s definitely a classic, anchored by two perfectly matched comedians and featuring one of the most hilarious musical numbers of all time. But until I decided to write about it for the Backstage Blogathon, I had never really considered its portrayal of the entertainment industry and what it has to say about putting on a show (or even a movie). It was always such a silly premise, two producers trying to swindle money away from old women by putting on a sure-fire flop, that the wackiness distracted from the fact that the film is genuinely a satire of getting a show made, specifically in the way it approaches the various players involved in putting on the production: the writer, the director, the actor, and of course the producers.

What I love about The Producers as a satire is that nugget of truth in the way it portrays the various pieces of the show. Max and Leo’s first stop is to visit Franz Liebkind, the writer of Springtime for Hitler, and as over-the-top as Liebkind is in his devotion to Hitler, his protectiveness of his work certainly rings true for every author. There are many real world examples of an author being promised that the production will be faithful to the original work, only to see a finished product that bears little resemblance to the author’s vision. You could almost feel sorry for Liebkind watching Springtime for Hitler and seeing his beloved leader turned into a laughing stock, if only his play was about anyone other than Hitler. (Which is, of course, the genius of the film.) Of course, at the other end of the spectrum is LSD, the play’s lead actor, who has no idea what’s going on and is incapable of being anything other than himself. He’s the sort of actor you see in a film or onstage and instead of watching the character they’re supposed to be playing you can only see the actor. Plenty of names spring to mind of actors who, instead of bending themselves to fit the role, bend the role to fit themselves.

Then there’s the director, whose gay stereotyping was probably a riot in 1968 when the film was released but which feels outdated today. Far more interesting is what the character has to say about directors in general. His story actually meshes nicely with many modern day stories we hear about directors in the news. Springtime for Hitler appeals to Roger de Bris because of how different it is from what he’s traditionally been associated with. How often do we hear that a director wants to redefine himself, whether a comedic director doing drama, a dramatic director doing comedy, or Michael Bay making a current events political thriller? De Bris may be utterly clueless (“I, for one, never realized that the Third Reich meant Germany!”), but he longs to be more than just a director of musicals. At the same time, he’s completely unable to break away from his instincts, as in the space of one chunk of dialogue he both derides his typical works and imagines transforming Springtime for Hitler into exactly the sort of show he just mocked. “Dopey show-girls in gooey gowns.  Two-three-kick-turn!  Turn-turn-kick-turn!  It’s enough to make you throw up!  At last a chance to do straight drama!  To deal with conflict, with inner truth.  Roger De Bris presents history.  Of course, I think we should add a little music.  That whole third act has got to go. They’re losing the war. It’s too depressing. We’ll have to put something in there. Aaah! I see it! A line of beautiful girls, dressed as Storm Troopers, black patent leather boots, all marching together… Two-three-kick-turn!  Turn-turn-kick-turn!”

At the heart of the film are the producers, Max and Leo. They’re certainly the embodiment of irony in the film, both in their role within the story and their actions within it. We, the audience, find ourselves rooting for these characters who are trying to commit fraud and are using the writer, director, and actor as pawns in their scheme. They’re the film’s heroes, and we watch as they go to enormous lengths to put on the worst play imaginable, only to see it become a smash hit, making them both successful and a complete failure. But what might Mel Brooks be trying to say about producers in general by the characters in the film? It’s easy to see them as the embodiment of greed in the entertainment industry, concerned only with money at the expense of art. But perhaps he’s saying that the success of a film or a show is so random and unpredictable that producers are irrelevant, that a show succeeds or fails not because of them but in spite of them.

Of course, the funniest part of The Producers is that Mel Brooks was, or would become, all of the parts of show business he mocks in the film. He wrote and directed The Producers and would go on to star in and produce many of his films throughout his career. So when he writes an exchange like the one in the end of the film where Leo tells Max that they can’t kill the actors because, “Actors are not animals! They’re human beings!” and Max replies “They are? Have you ever eaten with one?” you realize that Brooks is writing that dialogue from both sides of the conversation. Still, despite Brooks’ lack of theater success writing plays (he’d written two moderate theater flops), I doubt that The Producers was ever intended as a biting satire of showbiz. Brooks’ films are too silly and too interested in getting people to laugh to be concerned with commentary, but it’s also easy to see The Producers growing out of his own frustration with the entertainment industry. It’s fun to imagine which writers, directors, actors, and producers inspired the helplessly goofy characters in the film, or perhaps whether Brooks himself inspired some of them. The Producers is hardly an in-depth look at what goes on backstage to bring a show to opening night, but underneath all of the laughs there’s just a little grain of truth to which those in the industry can surely relate.

3 thoughts on “Backstage Blogathon: The Producers”