I really hadn’t planned on writing any more about The Lone Ranger, but a series of news articles and quotes that have been floating around this week, along with countless commentary, have me feeling like I should weigh in.  First, Disney has projected that it will lose $160-190 million on The Lone Ranger.  At the same time, or possibly in response to this, several people behind the film have piped up to blame the critics for the box office failure of their film. END_OF_DOCUMENT_TOKEN_TO_BE_REPLACED

All of that is superficial, however, because where World War Z really stands out is its scope.   END_OF_DOCUMENT_TOKEN_TO_BE_REPLACED 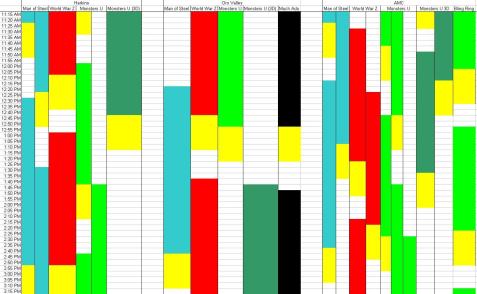 So, naturally, I decided to repeat the event this year, making it an annual birthday tradition.  I decided on having it this Saturday at the newly refurbished theater that is the closest to my house (a different theater than the one I went to last year).  I chose a range of movies that would give me a variety of styles and hopefully a good scattering of showtimes.   END_OF_DOCUMENT_TOKEN_TO_BE_REPLACED