This post is a part of the “Oscars Snubs Blogathon” hosted by Silver Scenes and The Midnite Drive-In.

If you were going to vent about the Oscar snub that bothers you the most, there are plenty of popular options from which to choose. You might still get riled up thinking about how Shakespeare in Love beat Saving Private Ryan for best picture, that Forrest Gump won out over Pulp Fiction, or that Brokeback Mountain lost to Crash. Perhaps you’re indignant that Peter O’Toole never won an Oscar, or that Leonardo DiCaprio is still waiting for his. You could have a particular category that always manages to disappoint you, like Best Original Song does for me. Or maybe you’re just baffled that films like Around the World in 80 Days or Oliver! could have been marked among the best films of all time while something as influential as Star Wars was passed over. But given 88 years of Academy Awards history, you probably would not choose to object to the victory of The Lord of the Rings: The Return of the King, arguably the most popular film to ever with the Oscar for Best Picture. But to me, the best film of 2003 was a different long-titled film adaptation of a popular book series about men at war: Master and Commander: The Far Side of the World.

END_OF_DOCUMENT_TOKEN_TO_BE_REPLACED

After three Hobbit movies and three Lord of the Rings films, it’s hard to view The Hobbit: The Battle of the Five Armies as a standalone picture.  It carries far more weight than it necessarily should, and as the presumed final film in the Lord of the Rings saga it has higher expectations than perhaps are fair.  So while it’s a film that can be both thrilling and emotional while also plodding and uneven, its place in the saga serves to magnify both its faults and its virtues as a representation of the successes and failures of the Hobbit trilogy and the LOTR saga as a whole.  Narratively, it serves as both and end (to The Hobbit) and a beginning (to Lord of the Rings), but it’s status as a link doesn’t detract from the big dramatic moments of the film’s story, even if at times it feels designed more as a link than as a cinematic experience of its own.

END_OF_DOCUMENT_TOKEN_TO_BE_REPLACED 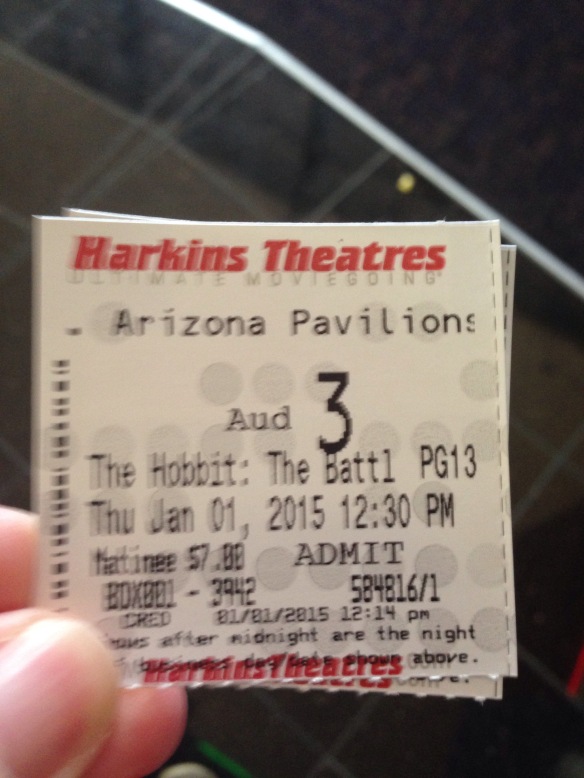 The final film in The Hobbit trilogy is approaching.  It has a new subtitle, The Battle of the Five Armies, which replaces the earlier title There and Back Again.  And until they come up with a way to turn The Silmarillion into a series of films or they decide to make The Ongoing Adventures of Legolas and Gimli (which I would totally watch), this will be the final film in Peter Jackson’s epic Middle Earth saga, comprising six movies over 13 years.  And now we’ve got the first teaser trailer for this final film.  Take a look, and read on for my thoughts below:

END_OF_DOCUMENT_TOKEN_TO_BE_REPLACED

I figure that because I (intentionally) gave you a horrible trailer this morning, that I owed you an alternate.  So here, I present you with the freshly released trailer for The Hobbit: The Desolation of Smaug.  Watch below, and read on for my thoughts:

1) Do you think we can go ahead and compare this film to The Two Towers?   END_OF_DOCUMENT_TOKEN_TO_BE_REPLACED

The trailer for Thor: The Dark World, aka Thor 2, was released recently.  It’s due out November 8th.  Take a look at the trailer and read on for my thoughts.

END_OF_DOCUMENT_TOKEN_TO_BE_REPLACED

Every movie fan is sad today at the loss of Ray Harryhausen at age 92.  Born in 1920, his first job in Hollywood was working on Mighty Joe Young for Willis O’Brien, the pioneer of stop-motion animation whose work in King Kong inspired Harryhausen to follow in his footsteps.  That successful beginning launched a decades-long career as one of the leading visual effects masters in Hollywood.

Despite never winning, or even being nominated for, a competitive Oscar, Harryhausen left a lasting mark on the visual effects industry.  His style and creativity helped inspire a generation of filmmakers, including legends like Spielberg, Lucas, Burton and Cameron.  Harryhausen’s ability started to truly blossom with The 7th Voyage of Sinbad and its two sequels in the 50s and 60s, but continued all the way until his last movie in 1981, Clash of the Titans.  By that point, fantasy films were dying out (until Lord of the Rings revived them in the 2000’s), replaced by science fiction as the popular spectacle movie genre.

Harryhausen’s last film was released before I was born, and I grew up as a member of the Jurassic Park generation of special effects, but his films are still impressive today, especially my favorite, Jason and the Argonauts. END_OF_DOCUMENT_TOKEN_TO_BE_REPLACED