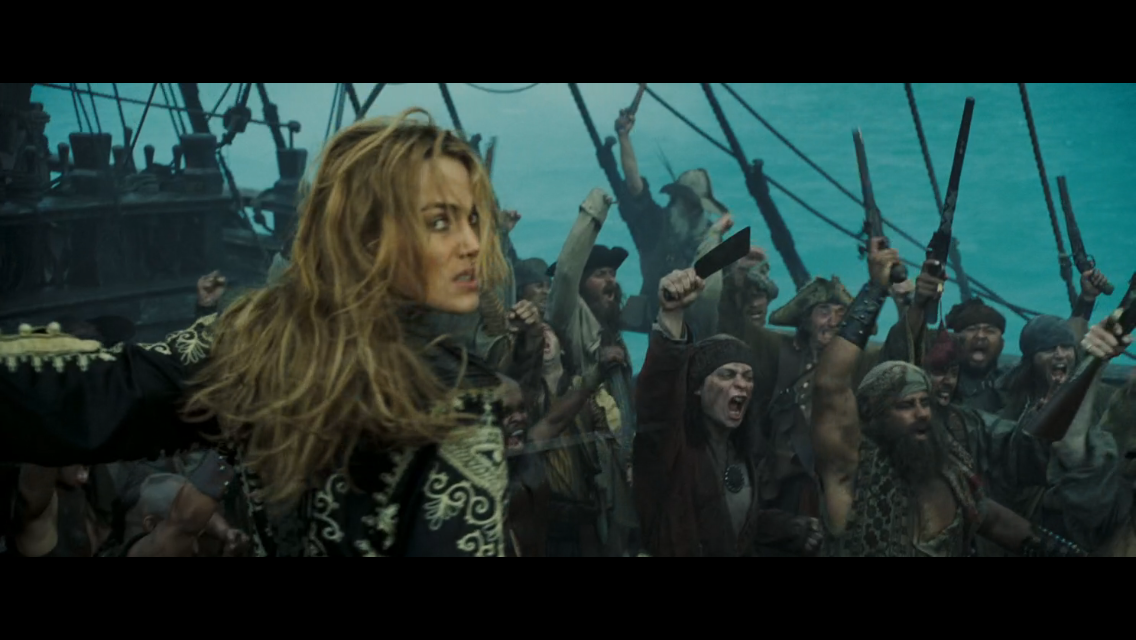 I’ve written a lot about Pirates of the Caribbean over the years, from my magnum opus, a two-part analysis of the original trilogy of films, to various other articles on my various favorite moments from the films (here, here, and here). With Valentine’s Day coming this weekend it seemed like a perfect time to highlight my favorite movie kiss of all time, from Pirates of the Caribbean: At World’s End between Will and Elizabeth. There are plenty of swoon-worthy moments and kisses between the pair throughout the trilogy, but for me nothing tops their impromptu wedding and the kiss that follows. It’s a perfectly crafted mix of clever writing, action, earnest performances, fantastic music, and visual flair, all built on the backs of the films worth of relationship growth and obstacles. Take a look for yourself, and then read on to find out why I love this kiss above all others.

END_OF_DOCUMENT_TOKEN_TO_BE_REPLACED

Pirates of the Caribbean: At World’s End

Jack Sparrow: It is pronounced ‘egregious’!

I’ve mentioned my love for a good movie speech before.  So it was only a matter of time before we got to Elizabeth Swann’s speech at the end of Pirates of the Caribbean: At World’s End.  Take a look:

There are a lot of things that are required for a good speech.   END_OF_DOCUMENT_TOKEN_TO_BE_REPLACED

The third CD that I ever bought was a film soundtrack (the first two were Michael Jackson’s “Dangerous” and Garth Brooks’ “Greatest Hits”).  It was the soundtrack to Independence Day, and I actually bought it in the hopes of it having R.E.M.’s “It’s the End of the World as We Know It (And I Feel Fine)” which for some reason I really wanted on CD.  I was disappointed when the song was missing from the soundtrack album, but after listening to the CD I realized how much I enjoyed the score, composed by David Arnold.  Thus began my obsession with film scores, and my collection of albums showcasing them.

I’ve been listening to the Jurassic Park soundtrack for the past week or so on my commute to work, and I’ve realized that there are several very big problems with the film score album as a whole in the industry.  I don’t know why it’s so damn hard to put together a decent album from a film score, but I’ve come up with a list of several of the problems: END_OF_DOCUMENT_TOKEN_TO_BE_REPLACED

Today’s Friday Favorite, from the final film of the trilogy, is one that I actually spent a long time discussing in part 1 of my Pirates of the Caribbean analysis.  As the final battle approaches, Elizabeth, Barbossa and Jack head to parley with Beckett and Davy Jones (with Will alongside, having lead the East India Company fleet to Shipwreck Cove).  Watch the scene below (in two parts, of varying quality, sorry) and then read on for my analysis: END_OF_DOCUMENT_TOKEN_TO_BE_REPLACED