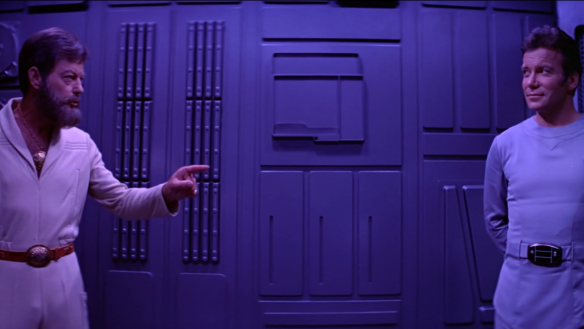 Kirk: What was the problem down there?

Ellen: He insisted we go first, sir. Said something about first seeing how it scrambled our molecules.

Kirk: That has a familiar ring, doesn’t it? Starfleet, this is Captain Kirk. Beam that officer up now! (McCoy materializes on the transporter pad.) Well, for a man who swore he’d never return to Starfleet.

Kirk: Bones, there’s a thing out there…

McCoy: Why is any object we don’t understand always called a ‘thing’?

Kirk: …headed this way. I need you… Dammit Bones, I need you! Badly!

McCoy: Permission to come aboard?

McCoy: Well, Jim, I hear Chapel’s an MD now. Well, I’m gonna need a top nurse, not a doctor who’ll argue every little diagnosis with me. And they’ve probably redesigned the whole sickbay, too. I know engineers. They love to change things.