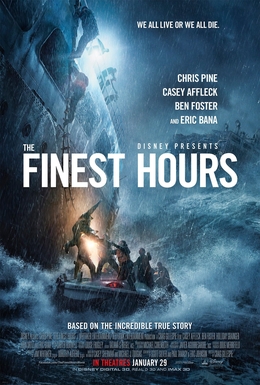 On February 18, 1952 the tanker ship SS Pendleton broke in half off the coast of Massachusetts in the middle of a massive storm. As the bow section sank along with her captain, the 33 surviving souls in the stern section raced against the clock to find a way to keep what remained of the ship afloat long enough for the Coast Guard to rescue them, not knowing whether any distress call had been sent or if anyone was even looking for them. What they had no way of knowing was that in a freak coincidence they weren’t the only tanker ship to snap in two that day, and the Coast Guard had already dispatched most of its available fleet to rescue the crew of the SS Fort Mercer. Meanwhile the Coast Guard station in Chatham has sent one of its boats out to assist with the Fort Mercer when word comes in of the Pendleton’s predicament. The only choice the new commanding officer has is to send out a four man crew in a small boat over an impossible-to-cross sandbar into a storm likely to get them killed in the hopes that they can rescue more than thirty men on a boat built to carry twelve.

Thus begins one of the most courageous and extraordinary rescues in the history of the Coast Guard. The Finest Hours splits its time between the efforts of the Pendleton survivors, the rescuers’ attempts to make it out into open water and to find the wreck, and those left behind on the shore waiting for news and fearing the worst. Aboard the Pendleton, mechanic Sybert fights to convince the crew not to take their chances in the lifeboats and instead attempt to run their half of the ship aground to slow the rate at which they’re sinking. To do that they’ll have to rig up a manual rudder and patch the numerous leaks while the level of water inside the engine room threatens to rise above the level of the air intakes and permanently disable the motors. On the small Coast Guard rescue boat, Bernie Webber fights monster seas which threaten at every moment to overwhelm their tiny craft, all while having to do without the radio or compass after the ship is damaged by one particularly vicious wave. Back at home, Bernie’s new fiancé Miriam refuses to sit quietly and wait for news despite being told that’s how the other women behave, storming into the commanding officer’s office and demanding that he call Bernie back.

The Finest Hours has a lot in common with films like The Perfect Storm and other high-seas rescue movies, but manages to stand on its own by not trying to outdo what’s come before. The true story of the rescue of the Pendleton survivors is thrilling enough to be engaging without the need for obvious embellishment. Director Craig Gillespie and the film’s writers keep things understated and let the heroic actions speak for themselves. You won’t find any inspirational speeches, emotional last-minute confessions, waving American flags, or stunts worthy of a superhero. Both the shipwrecked sailors and their rescuers would never give a speech when time is of the essence, the only choice is to keep fighting, and a few words will do just as well, and the film respects the audience enough to assume that viewers can figure out the stakes without the film having to constantly restate them or wax poetic about the dangers onscreen. Combined with the 1950’s period setting, this restraint gives the film its classic, old-fashioned atmosphere, as though the film itself could easily have been made within a handful of years of the events themselves if only the visual effects of the time period had allowed filmmakers of the era to realize the violence of the storm and the perils of the situation as vividly as they are in The Finest Hours.

The cast also contributes significantly to the film’s retro style. Chris Pine stars as Bernie Webber, a shy, humble, taciturn young Coast Guardsman, whose heroism comes not from some overinflated sense of duty but from a determination to do the right thing and the best he can. Pine’s Webber will probably come off as bland to modern audiences, but it’s the sort of character we saw a lot of back in the 50’s, quiet and dignified. Casey Affleck’s performance is more interesting as Sybert, the leader of the Pendleton survivors, if only because he seems to be doing an obvious impression of Humphrey Bogart, from his posture to the mix of a grin and a grimace he wears throughout the film and it’s surprisingly effective. It’s easy to see Bogart playing this part back in the day, so it’s not a stretch to imagine Affleck’s portrayal as an homage to the legendary actor. Holliday Grainger gets to do most of the film’s emotional lifting as Bernie’s fiancé Miriam, a woman unconcerned with the role her neighbors want her to play. Miriam is the sort to propose to her boyfriend instead of waiting for him to make a move, and challenges the town’s expectations of the way she should behave at every turn, bringing heart to the film and warmth and compassion to the closed-off locals. The rest of the cast is rounded out with familiar faces, from Eric Bana as the base’s commanding officer to Ben Foster, John Ortiz, and Abraham Benrubi, but it’s the trio of Pine, Affleck, and Grainger who anchor the film and bring it to life.

Really, The Finest Hours should be mediocre at best. It’s formulaic, predictable, and safe. It hits right in the center of films celebrating the heroism of American men in uniform, capitalizing on a true story to deliver the sort of cheer-worthy film that always seems to play well to a certain segment of the audience. On the surface it takes very few chances as a movie, sticking to a traditional pattern unlikely to garner much enthusiasm from the majority of viewers. But taken as a throwback to a different era of filmmaking, when subtlety reigned and stories were allowed to speak for themselves, it becomes far more engaging, and even charming at certain points. By not trying too hard and restraining from cramming patriotism and heroism down our throats in the modern style, The Finest Hours becomes something of a breath of fresh air and is far more enjoyable than one might expect or even than it has a right to be. Make no mistake, the true story of the Coast Guard’s rescue of the Pendleton is a dramatic, thrilling tale that deserves to be told, especially since the Coast Guard is so frequently neglected onscreen, but even so I never thought I’d enjoy The Finest Hours as much as I did. By combining stunning modern effects with old-school storytelling and the style of classic Hollywood, The Finest Hours brings something new to the table by embracing something old. While I’m not about to tell you to rush out and make sure you see it while it’s still in theaters, there are definitely worse ways to spend an afternoon than seeing The Finest Hours. Trust me, that’s more of a compliment than it sounds.

5 thoughts on “Review: The Finest Hours”