I had little interest in Suicide Squad when it was first announced. I’m not a big fan of villains, and the thought of watching villains forced by the government to save the day just didn’t do it for me. I get that antiheroes are far more popular than genuine, straight-up heroes, but I’d rather watch a good guy struggle than a bad guy seek redemption, especially if the point of a movie is to revel in how bad the bad guys are. I was intrigued by the fact that Will Smith signed on to the film, but other than Harley Quinn I wasn’t particularly familiar with any of the characters who make up the Suicide Squad beyond basic name recognition. And the early glimpses of Jared Leto as the Joker were simply off-putting, too much of a blatant attempt to be “modern” and to out-crazy Heath Ledger’s performance in The Dark Knight. The first trailer didn’t do the film any favors in my book (nor did the whiny statement Warner Bros. put out after the trailer was leaked, a far cry from the way Marvel reacted to the Avengers: Age of Ultron trailer leak), and I probably would have rated my chances of actually going to the film at 15%.

But this latest trailer has definitely upped those odds (I’d put it at maybe 45% at the moment). In many ways, Suicide Squad already feels like the DCEU’s version of Guardians of the Galaxy, but the difference in tone is more pronounced in the DCEU because of how dark and serious Man of Steel was. (Guardians was more fun than any of the other MCU films, but they’re all pretty fun and funny to begin with.) The use of “Bohemian Rhapsody” certainly helps strengthen the parallels between Suicide Squad and Guardians. It looks like more of a kick-ass action film than I would have expected, and funnier than I imagined. I’m more interested in the characters after this latest trailer, particularly Harley Quinn, and I like the variety of personalities. I’m still not a fan of the focus on villains, nor of the darkness and grittiness, but my opinion has definitely improved. 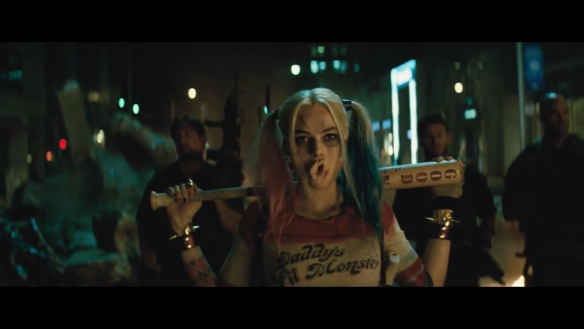 On the other hand, there’s Batman v Superman: Dawn of Justice. I’ve made no secret of the fact that I really disliked Man of Steel, even more than my review would let on. I thought the final hour of the film was a complete mess, the movie in general was missing the sense of hope and optimism that always set Superman apart, and even the color palette was dull. And this is from someone who actually likes Zach Snyder’s Sucker Punch. Nevertheless, I felt like the film had potential, particularly in its cast and the idea of giving a more modern take on Superman as an alien and outsider, even if it never lived up to that potential. So while I wasn’t eager for a sequel, I was at least willing to give it a shot, to see if they could build on the foundation of the first film while learning from their mistakes. Of course, when it was announced that the film would be Batman v Superman I lost a lot of my interest, only for it to be rekindled when Ben Affleck was revealed as the new Batman. I’m an Affleck fan, and I thought he’d make a good, older Batman (especially with Jeremy Irons as Alfred), and I liked the idea of trying to address the mindless destruction at the end of Man of Steel and having some consequences for Superman. The mythology of Superman, and the way the world reacts to him, is far more interesting than the character himself, and certainly more interesting than two invincible people punching each other through buildings. Batfleck could bring a much-needed human element to the story, and while the thought of watching the pair of them fight doesn’t hold much sway for me the thought of an intellectual debate between the two is intriguing. And then this happened:

I cannot stand Jesse Eisenberg’s Lex Luthor. He is so annoying that it makes me want to stop the video or change the channel whenever it comes on TV (which is a lot these days). I don’t have a problem with the actor, whom I’ve enjoyed in movies like Now You See Me and Zombieland, and while I personally wouldn’t have chosen him as Lex Luthor I admire the filmmakers’ desire to do something unexpected. But why in the hell does he have to be so completely obnoxious. I’m talking in particular about the scene in the trailer where he meets Bruce Wayne and Clark Kent, and does his schtick about Kent having a strong grip dozens of times now, and it gets more grating each and every time. I can’t imagine sitting through an entire film with that version of the character in it. (Eisenberg’s take on Lex is supposedly an impression of Max Landis, which makes even less sense.) His presence in the trailer was enough to knock my odds of seeing the film from 80% down to probably 30%. I’m sure there are justifications for his personality out there that fans have latched onto (it’s all an act!), but it rubs me the wrong way so much that I don’t know that I can overcome it. I’m seriously considering waiting for it to come out on DVD so I can rent it and fast-forward through his scenes. 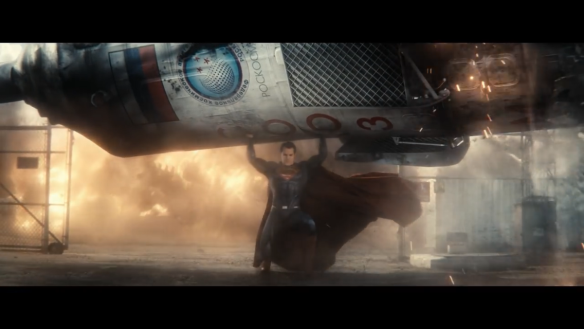 But if there’s one saving grace from the Batman v Superman trailer, it’s the first appearance of Wonder Woman. I’m infinitely more interested in a Wonder Woman film than in anything the DCEU has to offer, both from a feminist perspective and merely in the interest of having something different. In one brief moment in the trailer she changes the entire energy of the film, turning it from some adolescent “what would happen if Batman fought Superman?” debate into something more mature and worth watching. She’s the anti-Jessie Eisenberg’s Lex Luthor, and just one shot of her is enough to make me wish we could skip these next two DCEU films and get right to the standalone Wonder Woman (coming in 2017). I don’t know anything about Gal Gadot, nor if she’ll make a good Wonder Woman, but just the prospect of this, the most famous female superhero, is exciting. So in the end I’m torn. Can I possibly sit through what will undoubtedly feel like endless scenes of Lex Luthor in order to get to Wonder Woman? I’m probably sitting at 50-50 odds right now on Batman v Superman, and while I don’t have much hope after Man of Steel, I’m still an optimist in spite of it all. I’d take 20 more MCU films over the DCEU, but I’m still capable of being surprised.

What do you think? Are you excited for Suicide Squad? What did you think of the new trailer? How about Batman v Superman? Am I the only one who can’t stand Eisenberg’s take on Luthor? Are you excited to see Wonder Woman finally on the big screen? Do you have in interest in the still-unseen Flash, Aquaman, or Cyborg? (I just want to know who Jena Malone is playing!) Do you feel like this last trailer gave too much away? Where do you come down on the Marvel/DC debate? What trailers (older or new) would you like me to cover in future weeks? Do you prefer more screencaps or discussion? Let me know in the comments!