Disney/Pixar recently released the first full trailer for The Good Dinosaur, due out this November. It’s gone through a lot of changes since it was first announced, with an almost entirely new voice cast, a new writer, a new director, and a new composer. The film’s first teaser trailer just gave us a brief glimpse at the film’s premise, but the new full trailer gives us much more. Take a look and read on for my thoughts:

It’s interesting that even in this full trailer we never hear any dialogue from The Good Dinosaur, nor even an explanation of the film’s story. Contrast this with the early trailers for Inside Out, which focused on introducing the characters and setting up the story. Of course, Inside Out is a complex, unique film that needs some explaining, while The Good Dinosaur is looking like a more traditional adventure story, only starring a dinosaur. This trailer gives us the simple tagline, “a single moment can change history, a single kindness can change everything,” focusing instead on the impact of the film’s gorgeous visuals and the tone of the film, helped along by “Crystals” by Of Monsters and Men.

Right from the get-go, The Good Dinosaur looks visually stunning.  The shots above of the clouds and the tree branch look like they could be photographs.  We’re long past the early days of computer animation, where people marveled at how amazing and realistic were the images onscreen, but the craft is still progressing and The Good Dinosaur looks like another step forward for Pixar. 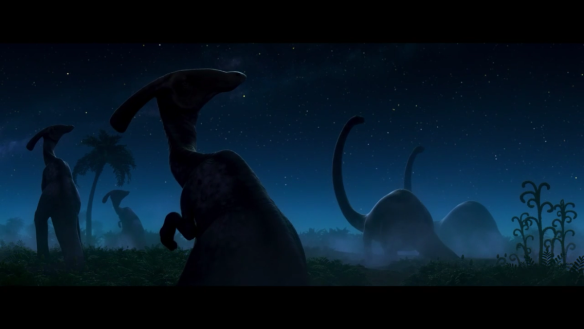 We get a brief repeat of the setup from the teaser trailer, where it’s made clear that we’re seeing a world where the extinction of the dinosaurs by an asteroid impact never happened.

And now we finally meet Arlo. Arlo is an Apatosaurus, who seems a little helpless. The film’s official description tells us that Arlo is lost far from home and is on his own, and we watch as he tries to fend for himself and munch on some berries, only to fail.

But Arlo is rescued by an unlikely friend, and it’s here we see The Good Dinosaur‘s twist.  In this unspecified time period, humans have started to evolve and live alongside dinosaurs, and Arlo adopts this lost human boy as a pet, naming him Spot. 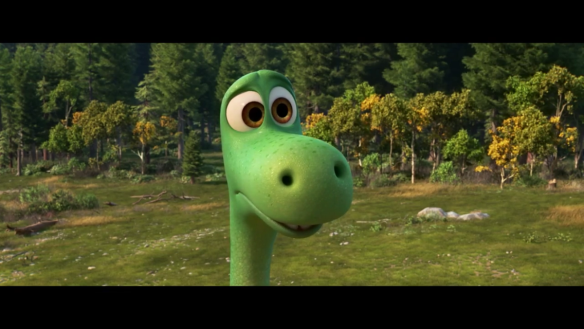 I really like the expressiveness of both Arlo and Spot. Pixar has human characters down pretty well now, but Arlo is almost a throwback to the earlier days of Pixar films, with exaggerated animal characters like in A Bug’s Life.  Arlo and the other dinosaurs in the trailer certainly don’t look “realistic” in the way the dinosaurs in Jurassic World do, they’re more “cartoony” for lack of a better word. 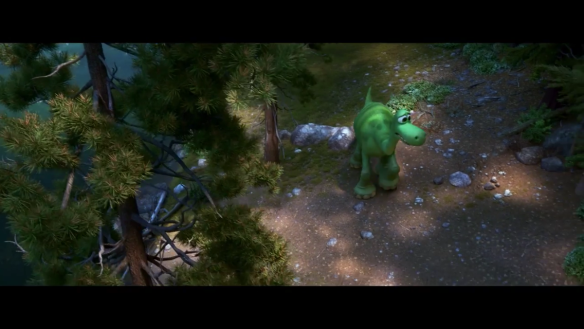 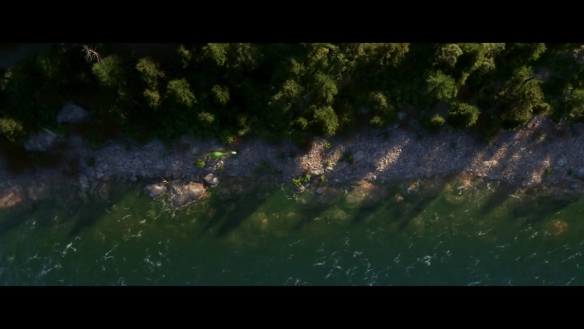 The cool thing about the trailer for me is the way it takes these “cartoony” creatures and presents them in a very realistic environment. Arlo’s design may be exaggerated and anthropomorphised, but the quality of the animation keeps him from feeling out of place, as though the character and the backgrounds came from two separate films. 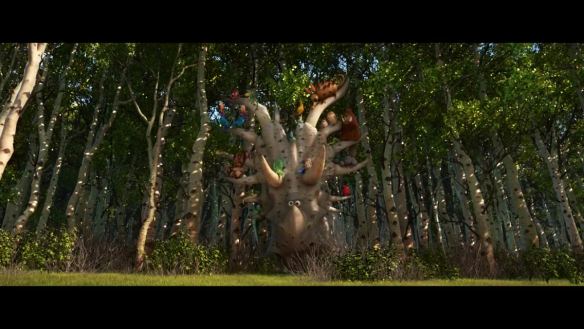 There are some things going on in the trailer that lack enough context for me to guess what we’re seeing, such as this dino carrying a menagerie of other animals on its horns.

But whatever these tiny fluffy things are with their big eyes, I want one. They’re adorably freaky. 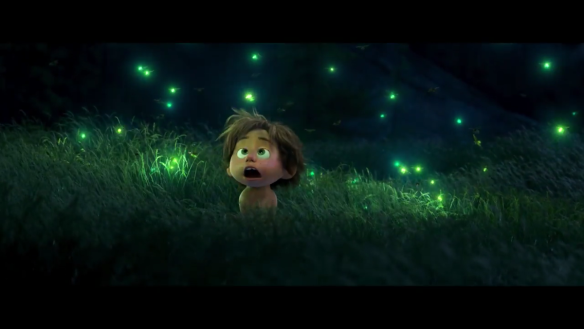 The visual centerpiece of the trailer shows Arlo and Spot surrounded by fireflies, as Spot looks amazed. It looks like one of those moments of quiet wonder that Disney and Pixar do so well, and we’ll see more of it in a minute.

The film won’t be all pretty pictures though, and it looks like Spot will be doing more than simply getting food for Arlo. I don’t know how old Spot’s supposed to be, but he’s a pretty tough kid to face down a giant snake. I guess when you evolve alongside dinosaurs, you just have to deal with whatever comes your way. 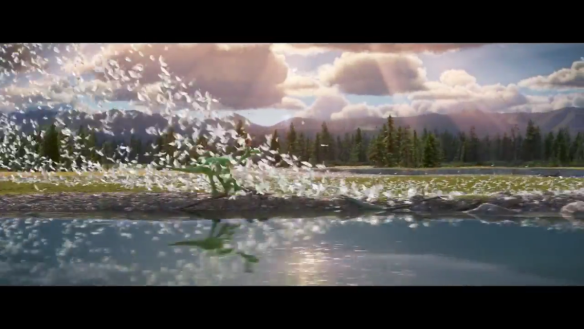 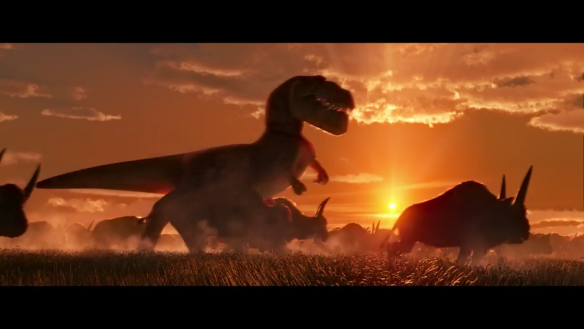 Here’s another example of the contrast in visuals and design. These aren’t the standard dinosaur shapes we’re used to seeing, things have been deformed and altered to suit the character style, but the more cinematic style of filming helps the dinos to feel more natural.

Among the dangers Arlo and Spot will face are apparently pteranodons. 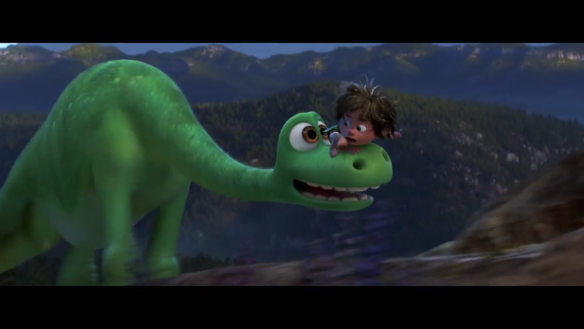 The heart of the film is obviously going to be the relationship between Arlo and Spot, and although we haven’t yet gotten a real sense of how that relationship will play out (master/pet vs odd couple friendship for example), I feel like I’ve already grown attached to the pair despite this short, wordless glimpse. 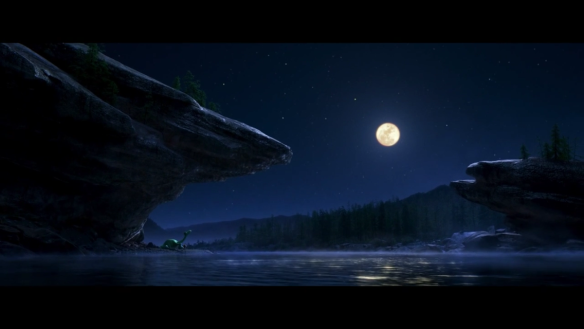 I have all the faith in the world in Pixar, as they’ve rarely let me down, but they do have something of an uphill battle with The Good Dinosaur. Coming off of Inside Out, their most creative film yet and the original, non-sequel film with the highest grossing opening weekend of all time, it feels like The Good Dinosaur is set up to be a slight step down. When you add in all of the changes the film has gone through, in what sounds like a shakeup triggered by the film’s original vision simply not working, and things are a little troubling. But this gorgeous and heartfelt trailer is a step in the right direction. (And Ant-Man is proof that enjoyable movies can come out of troubled productions.)

I’m definitely curious to hear from the voice cast, which includes Jeffrey Wright, Anna Paquin, Sam Elliot, and Frances McDormand (the only original cast member to survive through the film’s changes), but for right now I’m intrigued and hopeful. There’s no way The Good Dinosaur could live up to Inside Out‘s originality, so it’s best for them not to even try. A story, after all, is only as good as how its told, and there are few groups out there better at telling stories than Pixar. I may not be counting down the days until November yet, but I’m certainly eager to see more of The Good Dinosaur.

What do you think? Are you excited about The Good Dinosaur? Does its troubled production have you worried, or do you only care about the final product? Does the new voice cast intrigue you, or would you have preferred the original (which included John Lithgow, Neil Patrick Harris, Bill Hader, and Judy Greer)? Can The Good Dinosaur ever live up to Inside Out, and should it even try? Does every Pixar movie have to blow us out of the water? Does the studio’s legacy unfairly impact our expectations? What’s your favorite dinosaur? Let me know in the comments!

3 thoughts on “Trailer: The Good Dinosaur”