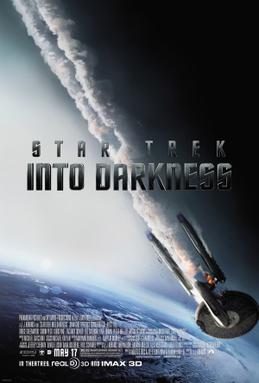 As I’ve said in previous blog entries, I’m a die hard Star Trek fan, but I’m going to do my best to write this review as a neutral outsider (the spoiler filled analysis, on the other hand, is fair game for my inner Trekkie/Trekker).

Star Trek Into Darkness picks up a short time after the events of 2009’s Star Trek.  Kirk (Chris Pine), Spock (Zachary Quinto) and the rest of the crew are still on the Enterprise, and we first meet them as a mission involving the primitive inhabitants of a planet goes spectacularly awry.  It’s a fun sequence, which was heavily shown in the trailers, and we get a sense of the way in which the crew has bonded since that first intense mission that drew them together.  The cast shines early and often in this sequel, and is by far the film’s highest strength.  The (often frustrated) interplay between the crew is consistently funny and heartfelt, and goes a long way towards convincing us of the bonds they share.

The ship and crew are called back to Earth after their mission, where they are met by a series of attacks on Starfleet facilities in London and at Starfleet Command in San Francisco, perpetrated by John Harrison (Benedict Cumberbatch), a former Starfleet weapons specialist.  Kirk and the Enterprise are sent to exact vengeance, and they uncover more than they bargained for, facing Klingons, cover ups and conspiracies.

The plot of Into Darkness twists and turns, with “surprises” that most people will see coming from a mile away.  Unfortunately, the plot is also full of holes that not only bring it down a notch upon reflection, but in fact actively detract from the viewing experience.  (I can usually forgive plot holes that are not so glaring as to be a distraction.)  The final third of the film is kind of a mess, with motivation and characterization thrown out the window in order to allow for the action.

The action is exciting, with spectacular effects and stunning images, but by the end it starts to drag a little.  The visuals are better than in the previous outing, and I feel that director J.J. Abrams had a much better grasp of how to shoot space action than he did the first time around (a good sign as he preps to begin filming the new Star Wars films).  I particularly need to praise Michael Giacchino’s score, which does an excellent job of capturing the adventurous spirit of Star Trek, combining classic cues with his soaring theme from the previous film.

Cumberbatch’s performance as Harrison is strong, but he gets little to do other than growl and threaten.  The film’s other villain, who I won’t spoil, is surprisingly more interesting, even if predictable.  But it’s on the crew of the Enterprise that the film rests, and it succeeds well enough because of it.  We’re obviously still in a growing phase for Kirk as a captain, who still has a lot to learn about loyalty and sacrifice if he’s going to get that treasured “5-year mission.”  Spock is also learning, struggling as always to balance his human half with his Vulcan half.

The rest of the crew all get their moments, and some shine brighter than others.  Simon Pegg continues to be brilliant as Scotty, and he gets the most sizable arc of the supporting cast.  On the other end of the scale, Zoe Saldana needs to hold out on the inevitable 3rd film for a better part.  Uhura has been reduced to basically being Spock’s worried girlfriend, and her one opportunity to show off her skills as communications officer only serves as the lead in to yet another action sequence.

Unfortunately, even setting aside my inner Trekkie, it’s impossible to overlook the general tendency of this film to play to the lowest common denominator.  It’s so frantically fast-paced that much of the action comes off as entertaining but hollow.  When that’s combined with gratuitous shots of women in their underwear (Alice Eve seems to have been added to the cast for no other reason) (read the writer’s response here), the end result is mildly insulting to any thoughtful moviegoer, whether a Star Trek fan or not.  When Iron Man 3 can chart new depths of character and find an excellent balance between action and feeling, it makes films like Into Darkness pale by comparison.  I think it’s clear that the filmmakers here content with what they’ve created, even if the result is the alienation of those who lament that this is all the Star Trek we’ll be getting for a while.  But even putting that aside, I still think we can and should expect a better movie, regardless of whether it’s the Star Trek we want or not.  It’s funny and exciting, but about as substantial as the popcorn that goes perfectly with it.