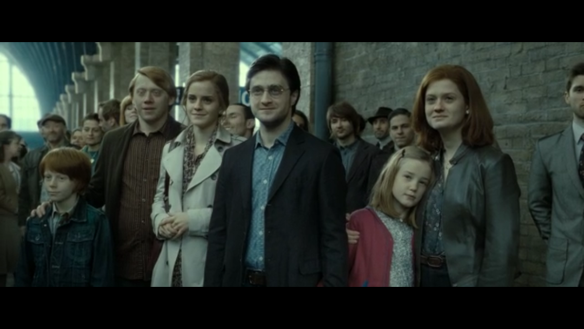 When he straightened up again, there were six Harry Potters gasping and panting in front of him.
Fred and George turned to each other and said together, “Wow — we’re identical!”
“I dunno, though, I think I’m still better-looking,” said Fred, examining his reflection in the kettle.
“Bah,” said Fleur, checking herself in the microwave door, “Bill, don’t look at me — I’m ‘ideous.”
…
“I knew Ginny was lying about that tattoo,” said Ron, looking down at his bare chest.
“Harry, your eyesight really is awful,” said Hermione, as she put on glasses.

Harry dropped the hair into the mudlike liquid. The moment it made contact with its surface, the potion began to froth and smoke, then, all at once, it turned into a clear, bright gold.
“Ooh, you look much tastier than Crabbe and Goyle, Harry,” said Hermione, before catching sight of Ron’s raised eyebrows, blushing slightly, and saying, “Oh, you know what I mean — Goyle’s potion looked like bogies.”

“No!” he said loudly, his voice ringing through the kitchen. “No way!”
“I told them you’d take it like this,” said Hermione with a hint of complacency.
“If you think I’m going to let six people risk their lives — !”
“— because it’s the first time for all of us,” said Ron.
“This is different, pretending to be me —”
“Well, none of us really fancy it, Harry,” said Fred earnestly. “Imagine if something went wrong and we were stuck as specky, scrawny gits forever.”
Harry did not smile.
“You can’t do it if I don’t cooperate, you need me to give you some hair.”
“Well, that’s that plan scuppered,” said George. “Obviously there’s no chance at all of us getting a bit of your hair unless you cooperate.”
“Yeah, thirteen of us against one bloke who’s not allowed to use magic; we’ve got no chance,” said Fred.

Dudley gently released himself from his mother’s clutched and walked toward Harry, who had to repress an urge to threaten him with magic. Then Dudley held out his large, pink hand.
“Blimey, Dudley,” said Harry over Aunt Petunia’s renewed sobs, “did the dementors blow a different personality into you?”
“Dunno,” muttered Dudley. “See you, Harry.”
“Yeah . . .” said Harry, taking Dudley’s hand and shaking it. “Maybe. Take care, Big D.”
Dudley nearly smiled, then lumbered from the room. Harry heard his heavy footfalls on the graveled drive, and then a car door slammed.

“It’s fine,” Harry assured her. “It doesn’t matter, honestly.”
“Doesn’t matter?” repeated Hestia, her voice rising ominously. “Don’t those people realize what you’ve been through? What danger you are in? the unique position you hold in the hearts of the anti-Voldemort movement?”
“Er — no, they don’t,” said Harry. “They think I’m a waste of space, actually, but I’m used to —”
“I don’t think you’re a waste of space.”
If Harry had not seen Dudley’s lips move, he might not have believed it. As it was, he stared at Dudley for several seconds before accepting that it must have been his cousin who had spoken; for one thing, Dudley had turned red. Harry was embarrassed and astonished himself.
“Well . . . er . . . thanks, Dudley.”
Again, Dudley appeared to grapple with thoughts to unwieldy for expression before mumbling, “You saved my life.”
“Not really,” said Harry. “It was your soul the dementor would have taken. . . .”
He looked curiously at his cousin. They had had virtually no contact during this summer or last, as Harry had come back to Privet Drive so briefly and kept to his room so much. It now dawned on Harry, however, that the cup of cold tea on which he had trodden that morning might not have been a booby trap after all.