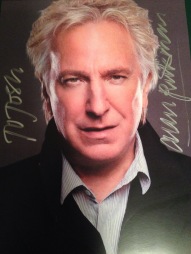 It’s rare that an actor who was almost exclusively relegated to supporting roles can have a huge impact on audiences and create so many memorable performances and characters, but Alan Rickman was just such an exception. Rickman, who passed away today at age 69, is rightfully being remembered for his famous roles as villains in movies like Die Hard, Robin Hood: Prince of Thieves, and the Harry Potter series (yes, Snape was a hero in the end, but for seven and a half films Rickman was playing the role of a villain), but his work was much more varied than headlines would suggest. He showed remarkable range, with a brilliant ear for comedy, a uniquely gorgeous voice, a charm and sophistication seldom seen these days, and the ability to rip your heart out of your chest and leave you emotionally destroyed. His roles always seemed to be the ones that stuck with you long after the rest of the film had faded from memory, and he could easily outshine those billed above him no matter the part. Every performance found layers to the characters that went beyond the script: his heroes were complex, his villains lovable. And while his career in the theatre is as worthy of celebration as any aspect of his career, his legacy lies in his varied roles on film, through which he connected to millions on a very personal level.

END_OF_DOCUMENT_TOKEN_TO_BE_REPLACED

Welcome to “Friday Favorites” which highlight some of my favorite movie-related things.  It could be a favorite character or casting choice, a favorite song or score, a favorite scene, line of dialogue, shot or simply a moment.  Anything is possible (costumes, sets, etc) and I’d love to hear your suggestions.  Note: Just because something appears here does not make it my absolute #1 favorite thing in that category, but it is simply “one of my favorites”.

Dogma is an interesting movie.  In fact, it’s a movie that feels like several different movies that don’t belong together wrapped into one.  One part tells the story of two familiar stoners who get caught up with the forces of heaven and hell, and is filled with sex and poop jokes of the lowest common denominator.  Another part is the ensemble comedy about a band of holy misfits trying to prevent the end of the world.  And the third part, the part that keeps me coming back to the film after 14 years, is an interesting drama about faith in the modern world, featuring two angels who were kicked out of heaven for showing mercy towards humanity, and their quest to get back to the place they belong without regard for the consequences.

My favorite scene in the film comes as these angels, Bartleby and Loki (Ben Affleck and Matt Damon), have encountered a setback.  They’ve been challenged by a heavenly host of misfits, including the 13th Apostle, the voice of God, the last descendent of Jesus’s family and the two stoners.  Take a look below and then read on for my thoughts (and turn your sound up to get the full effect):