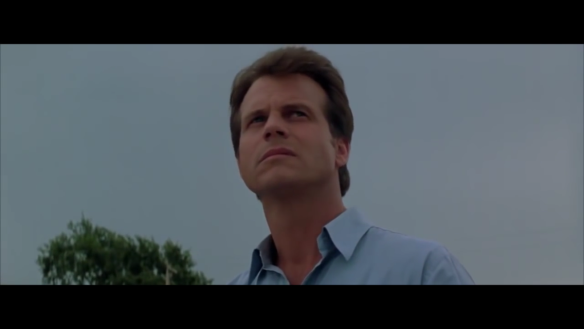 Bill Paxton is probably on your TV right now. The chances are that somewhere among the hundreds of cable and satellite channels you receive, Bill Paxton’s familiar face is grinning back at you. Throughout his career he chose roles in just the kind of popular movies that have become ubiquitous on television. Think about it. You wouldn’t be at all surprised while channel surfing to come across Apollo 13, Titanic, Aliens, Tombstone, Edge of Tomorrow, True Lies, Twister, or one of the countless other films perfectly suited to be filled with commercials and stretched to four hours so as to take up your entire weekend afternoon. And the odds are if you did stumble across one of those movies you’d stop to watch it for a bit, even if you’ve seen it a million times. And while Bill Paxton may not have been your reason for stopping, he just might be the reason you continued to watch long after you would otherwise have moved on.

Bill Paxton was rarely the primary draw of a movie. I can’t imagine many people saying, “Hey, do you want to go see the new Bill Paxton movie this weekend?” “Sure, I never miss his movies!” But he made every movie he was in better, and his every appearance onscreen made me smile even when I would turn on a movie having forgotten he was in it. He played behind or beside so many fantastic actors in some of the biggest movies of all time, but his honesty and earnestness as an actor (not to mention his versatility) allowed him to make a strong impression. He often served as a grounding influence in a film, bringing humanity, humor, or heart to the often larger-than-life events going on around him.

He delivered memorable moments with every role he played, from the sleazy con man who wet his pants in True Lies to the enthusiastic younger brother of Wyatt Earp in Tombstone. He steals every scene as Hudson in Aliens, the ultra-cocky space marine full of wise cracks and insults but who is completely unprepared for the menace they’re about to face. His “Game over, man, game over!” stands out among the icy characters accepting their circumstances as the team is slowly whittled down. His performance as the treasure hunter in Titanic seems inconsequential compared to the epic love story of Jack and Rose, but he stands in for the audience throughout. As he slowly begins to learn that the shipwreck was more than a historical curiosity, that people lived, loved, lost, and died aboard that ship, it reminds us that we’re watching more than just a doomed love story but a tragedy that’s more than just an interesting footnote in textbooks. And then there’s poor Fred Haise in Apollo 13, the goofball who spends most of their terrifying trip around the moon sick and feverish. He seems the odd man out aboard the wounded spacecraft behind Tom Hanks as the leader Lovell and Kevin Bacon as hothead pilot Swigert, but he has my favorite line in the film when he angrily berates Swigert for railing against the “piece of shit” Lunar Module. “Hey,” he exclaims reproachfully, “this piece of shit’s gonna get you home!” In good films and in bad, Paxton always delivered a solid, dependable, heartfelt, and ultimately human performance, making every film better by his mere presence and his commitment to doing his very best to bring his characters to life.

Bill Paxton spent most of his career in supporting roles, despite an extensive filmography with a variety of filmmakers, but he did get to take the lead (and even direct) on multiple occasions. Some of these were unfortunately forgettable (Mighty Joe Young, Thunderbirds), through no fault of Bill’s, but he truly got to show of his depth and range as an actor in Big Love, the excellent show about a polygamist family that ran for several seasons on HBO. But for me his greatest role came in one of my all-time favorite films, Twister. I’ve probably seen Twister as much, if not more, than any other film in my life. It was the first film I ever saw in a stadium seating movie theater (on the top row, no less, in a newly built theater whose air conditioning was apparently not working; it was one of the most memorable moviegoing experiences in my life), and longtime readers of this blog know that I’ve spent a good deal of time overthinking and overanalyzing this movie. Its soundtrack is even my most listened-to album. And while I maintain that it has the greatest visual effects ever scene onscreen, my favorite film score, and a unique screenplay thanks to obvious contributions from Joss Whedon, the reason the movie works is because of Bill Paxton.

I could go through literally every line, moment, and expression of Bill’s in the film and have a comment or observation about the choice’s Paxton makes at every turn, but allow me instead to highlight a few of his best moments and how they make the film so much more than it has any right to be. Helen Hunt’s Jo may be the more flashy of the two main characters, with her damaged past, her obsessive quest, and her seeming death wish, but it’s Bill who makes the whole thing work. Paxton’s Billy is a man who has taken the seemingly straight-laced job as a weatherman after years as a storm chaser alongside Jo. Throughout the film he has to show us both why Bill would leave such a dangerous and exciting life, but also why he eventually returns to it. And hand-in-hand with that is the parallel with his relationship with Jo. Through his eyes Jo is alternately a crazy, self-obsessed mess of a person with whom it’s impossible to have a personal or a working relationship, while simultaneously a passionate, brilliant scientist who cares with all her being about doing the right thing, and who genuinely loves her work and her family of storm chasers.

There’s no denying that Paxton and Hunt have a phenomenal chemistry throughout the film, and nowhere is that more evident than in their conversation the first time Jo and Bill are alone together on the chase. It’s a brilliantly acted scene that conveys so much of how their relationship worked and the baggage they both now carry because of it. The way Bill anticipates and braces himself for what he knows Jo will say about his engagement to Melissa, and how quickly the old wounds open up as they talk, will feel intimately familiar to anyone who has ever been stuck side by side with an ex, but underneath that you can see the current of what them get married in the first place despite having such similar strong personalities. (Apologies for the poor quality of the video below.)

Beyond just his relationship with Jo, Bill Paxton gives Billy an internal conflict that drives the film. He sells the dragonslayer aspect of the film, the idea that Billy’s unique gift and ability to “know what a tornado is thinking” make him supremely suited to the life of a storm chaser, and it’s that ability that ultimately refuses to allow him to set his old life aside. He would have had a good life with Melissa, but he truly belongs with the chasers, and the struggle between the life he wants and the life he needs to live is etched on his face in every expression and the way he delivers every line. When he yells at Jo to “stop living in the past and look at what you got right in front of you”, and then he turns away from her in shame at what he said (knowing his fiance heard him) and in pain to find himself in the same situation he intentionally left behind, my heart just breaks for him. You know that returning to this life may be more fulfilling than that of a weatherman, but it will be a life of pain and struggle, where his passion will come face to face with the fact that the woman who needs him has her own passions and baggage that will work to drive them apart. He helps you see both why he loves this woman and why he left her.

But as I said before, Bill Paxton helped ground every movie he was in, and that’s especially true in Twister. It’s a film full of crazy, larger-than-life characters, and Billy has to be the calm at the center of this stormy family, holding it together but allowing all of the personalities to breathe. But Paxton’s very nature as an actor helps him to sell sequences that would never have worked with a different actor. His honesty as a performer helps you believe Bill when he simply looks at the sky and tells the team what’s going to happen. It makes it easy to see why they follow his lead, and if Billy called me on the radio telling me to hang back because an F5 might shift and bury me, I’d sure as hell listen. That honesty makes the visual effects more believable as well, and it’s not an easy thing to convincingly react to digital creations that aren’t there. But even when he tells Melissa that he never meant to hurt her by reuniting with Jo, you believe him, and it changes your entire perception of Jami Gertz’s character. Up until that moment Melissa is the comic relief, the fiance clearly mismatched to the film’s hero who is doomed to end up alone because Bill and Jo are meant to be together. But with Bill’s heartfelt apology, she instead becomes a victim of the lead couple’s history, just one other item in the “damage path” of their destiny to be pitied instead of mocked. As in all of his performances, Paxton made everyone around him better, and as an actor he knew when to step aside and let others have the spotlight.

I could talk about Twister all day, or even sing Bill Paxton’s praises in his many other roles, but you’ve undoubtedly seen him in his many roles in a variety of popular and familiar movies so you already know what I’m talking about. I’d be remiss if I left out his excellent recurring role on Agents of SHIELD, where he was just as scene-stealing as he was on Aliens, and he made he perfect Big Bad for the show’s first season, and his TV adaptation of Training Day is currently airing its first season on CBS. He’ll also be in The Circle on the big screen in a couple of months. It’ll be hard to find an actor to replace him, with such good-natured honesty in his performances and such a wide variety of performances. And while he leaves behind an excellent career of work filled with humor, talent, and heart, it’s heartbreaking to lose him to surgical complications when he still had so much to give as an artist. But for now, turn on your TV and surf through the channels. I bet he’s on there somewhere, waiting to make your afternoon a little better.

4 thoughts on “In Memoriam: Bill Paxton”