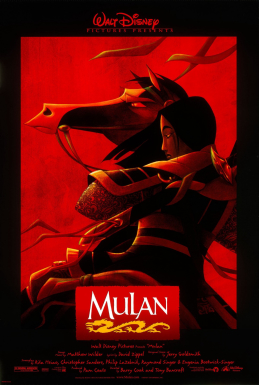 To no one’s surprise, it’s been confirmed that Disney has another live-action remake of an animated film in the works. Following on the heels of last week’s announcement that Jon Favreau is “reimagining” The Lion King, news arrived today that Disney is also planning to bring us a live-action version of 1998’s Mulan. That’s right, the film that Vice Presidential nominee (debating tonight) and Donald Trump’s running mate Mike Pence once used to argue against women in the military (all while claiming that sexual assault is just a natural side effect) will be back in theaters once again, giving the “mischievous liberals” at Disney the chance once again to “cause a quiet change in the next generation’s attitude about women in combat.” This post isn’t really about Pence, but I couldn’t let such a perfectly timed opportunity to bring that article up once more pass me by. But here’s one more quote, just to make sure this is stuck in your mind during tonight’s debate: “Despite her delicate features and voice, Disney expects us to believe that Mulan’s ingenuity and courage were enough to carry her to military success on an equal basis with her cloddish cohorts.”

I’ve already spelled out my opinions on the new trend of Disney remakes in my post about The Lion King, so I won’t repeat myself except to say that unlike many Disney fans I’m generally in favor of the remakes, even if I have issues with some of the specifics. But I am considerably more excited about the prospect of a Mulan remake than I am about The Lion King. To me, Mulan is the perfect Disney animated film to redo. It’s an epic story that’s ripe for some added drama and depth. It’s not nearly so widely beloved as some other animated films in Disney’s catalogue, and a new version could iron out some of the kinks in the original, particularly when it comes to tone. Mulan has the potential to be a kickass feminist epic (musical?), reaching the full potential that never felt completely unlocked the first time around.

Much like The Lion King, however, I have many questions. According to reports, the new version of Mulan will be a combination of the original Chinese legend and the Disney film, but we don’t know exactly how that balance will work out. Will the new film be a musical, retaining hits like “Reflection” or “I’ll Make a Man Out of You” or even its more forgettable numbers? My first guess would be no. I expect we’d get some hints of the songs in the score, and perhaps a new version of “Reflection” over the end credits, but otherwise I doubt there will be much effort to work the songs into the new movie. More important is the question of Mushu, Mulan’s dragon sidekick and the film’s most memorable character. I’m sure Mushu will appear in some form (but probably not Cri-Kee the cricket), but how much of a role he’ll have and whether he’ll talk are still up in the air.

But Disney is getting one thing absolutely right in having a global casting search for a Chinese actress to star in the film. There’s simply no excuse for whitewashing roles anymore, and Mulan deserves to have an almost entirely Chinese cast. I saw a post a while back about a live-action Mulan demanding that it have a cast that is 99% Chinese, with the remaining 1% being Eddie Murphy as Mushu, which sounds exactly right to me. I would hope Disney would find a way to work Ming-Na Wen into the film in some capacity, perhaps as Mulan’s mother, but the most important casting will be for Mulan and Shang. Chinese actors with great chemistry will be key (and singing abilities if they decide to make it a musical). China is a beautiful country with a rich history, and Disney has a great opportunity to do justice to the legend while still honoring the 1998 film.

What do you think? Are you excited for a live-action Mulan? Does it seem like a better fit for a remake than The Lion King? Should it be a musical, or would the tstory work better without singing? What other elements from the animated film should transfer over? Should Mushu talk? If so, could anyone other than Eddie Murphy play the part? (“Dishonor on you! Dishonor on your cow!”) Who would you choose to direct this new Mulan? Any ideas about casting? Let me know in the comments!