It’s funny how a trailer can get you excited for an upcoming film and feel completely satisfying without showing anything of significance or answering any of your burning questions. The first teaser trailer for Disney’s live-action remake of Beauty and the Beast gave us almost nothing into which we can sink our teeth, nor did it address any of the issues that have been debated since it was first announced. It didn’t offer a first glimpse of the redesigned Beast, nor of the household objects brought to life through performance capture. We weren’t given a taste of any of the new songs from composer Alan Menken, nor even an opportunity to hear Emma Watson’s singing voice. There were none of the famous moments from the 1991 film that are so ingrained in our memory. Instead, this teaser is all about atmosphere, giving us just a hint of dialogue among haunting images of the Beast’s castle, set to the prologue music from the animated film. Take a look below and read on for my comments and a breakdown of what little we did see.

The teaser’s first shot is Beast’s castle, which bears little resemblance to the animated castle but which is definitely more realistic. It’s much less vertical and less severe, though it still feels like an exaggerated French chateau. Of course, Beast’s castle here also serves as the foundation for the familiar Disney logo, so we’ll have to see how much the actual design changes from now until the final film version 10 months from now. 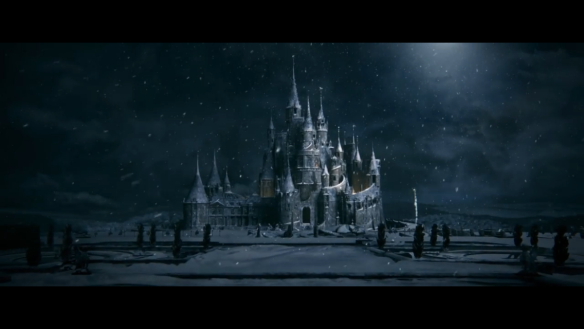 Next is a location sure to cause Disney fans to gasp with emotion, the famous ballroom, site of Belle and the Beast’s memorable dance to the Oscar-winning title song. It’s obviously in a state of disrepair, having been negelected throughout the curse, with what looks like icicles hanging from the chandeliers. And while I can’t say for sure, we might be getting our first look at a character from the film. Stanley Tucci is playing Cadenza, a member of the Beast’s household who has been turned into a grand piano (presumably he was a musician?), a character created for the new film. 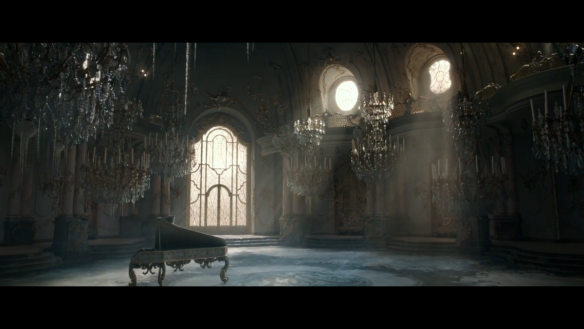 The trailer then segues into various shots of the castle, showing off the detail of the set design and contributing to the mood and look of the film. There’s a possible glimpse at Lumière in the back of the 2nd shot. 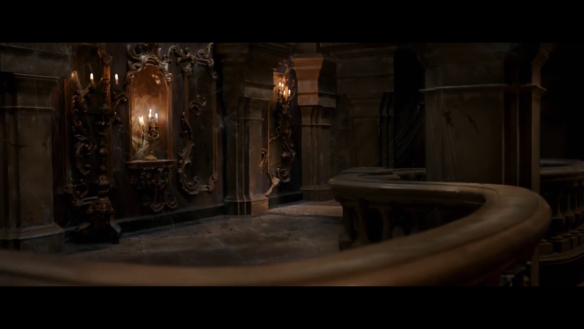 Next we see a portrait of the Beast (pre-curse) with his parents, looking suitably rich and spoiled, which at the last moment is slashed by the Beast with a growl, recreating a shot from the animated film’s prologue.

The screen goes black as we get our first and only bit of dialogue, between Ewan McGregor’s  Lumière and Ian McKellen’s Cogsworth. “Look, a girl!” “Yes I can see it’s a girl you fool.” “What if she is the one?” I’m not 100% sold on McGregor’s French accent/Jerry Orbach impersonation, but he’s solid singer and showman so I’m not going to sweat it too much after two lines of dialogue. We hear Emma Watson’s Belle ask, “Hello?” of the darkness, and watch as she enters cautiously through the front door, complete with gorgeous set detailing outside of the castle. 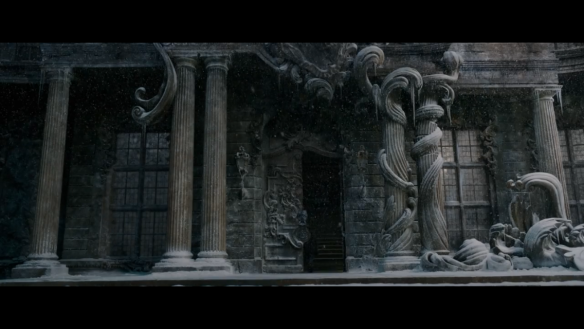 Lastly, we get our first look at the enchanted rose, still looking rather healthy here in the early days of Belle’s stay in the castle. We watch as Belle reaches towards the rose in wonder but the trailer ends before we can see the inevitable confrontation with the Beast which is mere moments away. 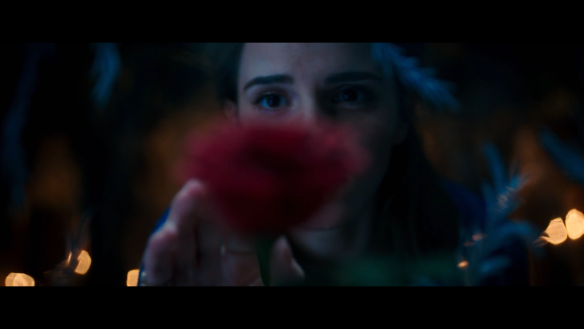 Rather than ending with the film’s title/logo, we’re simply invited to “Be Our Guest” as a petal falls and a hint of “Beauty and the Beast” plays.

In all, a satisfyingly sparse trailer, that shows almost nothing and yet leaves a big impression. Honestly, I wasn’t expecting to see too much this time around, especially as the film is still 10 months away. Now, the next trailer should give us considerably more. I would expect at least one musical segment (probably “Belle” but maybe “Be Our Guest” or even “Gaston”), a look at Lumière and Cogsworth at a minimum, and at least a glimpse of the Beast, but not much more. I would think Emma Watson would feature heavily in the next trailer, along with other human characters like Gaston, LeFou, and Maurice.

Ok, here’s where I need to make a disclaimer. I’m one of the few hardcore Disney fans who has genuinely enjoyed each of the live-action remakes that Disney has come out with in recent years (not counting The Sorcerer’s Apprentice, which is hardly a remake at all). I’m not saying they’re all great, but some of them I full-out love while others I at least like watching and have parts which I admire. And it’s odd, since I’m generally a purist about things and not a fan of remakes (like the new Ghostbusters). But translating from animation to live-action I feel is an endeavor that is both worthwhile and provides plenty of opportunities to update/change the material with the change of medium. I really appreciate how they’ve found a balance when it comes to faithfulness. Some of the remakes have been extremely faithful while others have completely rewritten the story. The trick is for Disney to continue finding reasons to remake these classic animated films, so that they can bring something new to the story, rather than just giving us a shot-for-shot remake that becomes pointless.

Alice in Wonderland kicked off the trend, of course, and it was a huge success and is perhaps my favorite from the bunch. It takes the familiar setting and characters of the original film and the book, but gives it a much stronger narrative and personal journey for Alice, while conveniently framing itself as a sequel of sorts to the story we know. Tim Burton mixed the familiar with the twisted, and the result was strong enough that the sequel is less than a week away. Maleficent was more of a mixed bag, completely rewriting the familiar tale of Sleeping Beauty in order to tell the story of that film’s villain (by far the most compelling character from the classic film). Sleeping Beauty was due for a rewrite, as while it may be the most beautiful of the classic-era Disney animated films, it’s also the dullest, with uninteresting characters and mostly forgettable music. Maleficent was not a complete success, some moments, particularly featuring the fairies, are just painfully awkward, but with two compelling leads and a focus on strong female characters it still won me over. Cinderella is simply stunning, and far more faithful than its predecessors in adapting the story for the real world. It captured everything I love about the original while making it deeper, richer, and more meaningful, and it’s simply gorgeous. And of course there’s The Jungle Book, another astonishing visual creation that largely succeeds even if it lacks a bit of the charm of the 1967 version.

So, in my book, Disney is batting 4 for 4, even if a few of those hits were close singles while others were home runs. So I have faith that Beauty and the Beast will be another success. The cast is seriously impressive, with some absolutely spot-on choices including Emma Thompson as Mrs. Potts and Josh Gad as LeFou. Emma Watson is a personal favorite of mine, and I’m eager to see what she can do in a musical. Bill Condon on the other hand has lots of experience with musicals, having written Chicago and directed Dreamgirls (an underrated gem), and has a number of excellent movies in his résumé, including Gods and Monsters, Kinsey, and last year’s Mr. Holmes. (He also directed the final two Twilight movies, the first of which is one of the worst movies I’ve ever seen.) But I’m especially intrigued by the fact that Stephen Chbosky is writing the screenplay. The writer/director of The Perks of Being a Wallflower, Chbosky has worked with Emma Watson, as well as writing for musical adaptations (Rent), so I’m curious to see what changes he makes to the original 1991 script. Will he keep only the major story beats and give it a complete workover, or will we get some familiar snatches of dialogue among the new stuff? Regardless, Perks is an excellent film with wonderfully realized characters, so I think he’ll be able to bring some real humanity to the story. All told, next March can’t come soon enough!

What do you think? Did this short teaser get you excited? Are you intrigued by what we’ve seen so far? What do you most want to see from the next trailer in a few months? Did the music give you chills? What do you think of Ewan McGregor’s French accent? How gorgeous is the production design? Am I the only one who is thrilled just because it means another big screen, live action musical? Are there any cast members you particularly like or dislike? Are there any songs from the film you’d cut? Are you as happy as I am that none of the songs from the stage version will make the transition? (I like the stage version, but the “new” songs felt rushed.) How many new songs will we get? (I think 4, one for Belle, one for the Beast, one between the two, and one with Maurice so Kevin Kline can sing. Plus “Human Again”, of course.) Any other thoughts? Let me know in the comments!

6 thoughts on “Trailer: Beauty and the Beast”