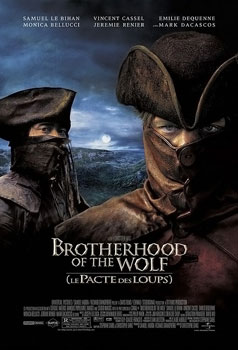 Le Pacte des loups tells a story based around the legendary beast of Gévaudan, an animal of some sort, presumably a wolf, that really attacked and killed perhaps 100 or more villagers in the province of Gévaudan in southern France in the 1700s. In the film, the king sends a knighted naturalist, Grégoire de Fronsac, to investigate the gruesome and mysterious deaths and to stop them if possible. Fronsac is accompanied by Mani, an Iroquois he befriended in America, and the pair find themselves embroiled in a conspiracy involving people from every aspect of life in the village. Local government, the nobility, and the church have joined forces with some commoners to use the beast to sow fear across the country and plant the idea that the beast was sent by God to punish the king for the effects of the Enlightenment and its placing of science above faith.

Going hand-in-hand with the political conspiracy part of the story is the fact that it’s also a period romance. Brotherhood of the Wolf has the luscious costumes, gorgeous sets, and romantic gestures associated with the genre, as Fronsac woos Marianne, the daughter of a local nobleman, while her brother, a one-armed hunter, lurks menacingly in the background, with more to him than meets the eye. One particularly stunning and sweet scene gives us a meeting between Fronsac and Marianne on a frozen lake in the fog, and it’s very lovely and romantic. But this seemingly chaste romantic film is balanced with a seedy underside, as Fronsac and the other young nobles spend considerable amounts of their free time in a brothel, where Fronsac meets an Italian prostitute who may know more about goings on in the village than anyone else. The political maneuvering, conspiracies, romance, and the historical nature of the film (many characters are based on real-life individuals) all make up one side of this multifaceted film, and although the period drama half of the film could stand alone as an interesting movie it becomes much more interesting when it’s juxtaposed with some more unusual genres.

Le Pacte des loups is also a straight-up monster movie, with all of the tropes you’d expect, and it has more than a few genuine scares. The beast at the heart of the story is a massive creation, some sort of unknown, mutated animal, with an armored hide and metal fangs. It roams the countryside killing seemingly at random, taking enormous bites out of anyone who strays across its path and leaving no survivors. At times, the film is entirely a horror film, bloody and violent, while other moments feel more like an action film as Fronsac and Mani chase the beast and try to capture it. The period drama/monster/horror mashup has been done before (see Sleepy Hollow for example), but it’s the final genre used in the film that really sets it apart. You see, Brotherhood of the Wolf is also a martial-arts picture, complete with intricately choreographed fight scenes as Fronsac and Mani protect the villagers, fight the conspirators, and even do battle with the beast itself.

It’s always fun to see countries play around with their own history on film, and it’s pretty common here in the US. Sometimes it’s done by rewriting history for the sake of plot (something like the National Treasure movies), or involves taking historical figures and putting them in unlikely situations (Abraham Lincoln: Vampire Hunter). And while I’m sure Le Pacte des loups is more enjoyable in that contacts to someone from France, it’s still interesting to see from an outside perspective what aspects of their own history the French minds behind the film were willing to play with. While most history-bending films tend to play things light or aim for comedy, Brotherhood of the Wolf takes itself completely seriously. As such, the genre combination doesn’t feel out of place, as the horror and martial arts pieces are given as much weight as the period drama. It can be a difficult feat to pull off successfully, as usually one aspect of these mashups falls flat compared to the others, but here they all feel integral to the story.

But what really makes Le Pacte des loups memorable to me is how “French” it feels. That’s a pretty nebulous term coming from someone without a lot of experience with French cinema, but even if you removed the language and the setting it would still feel like a French film. It’s kind of hard to describe what I mean by that, but it’s an instinctual reaction to watching the film. I expect French cinema to be beautiful, of course, but more than that I expect it to reflect a singular vision. American movies are often corporate works, as directors often have to compromise their vision for the sake of anticipated profits, but French films often feel like they are a triumph of artist over the system. As such, they can be filled with the unexpected, from unique visual touches to unexpected story developments.

There are a few moments in Brotherhood of the Wolf which I would think, even out of context, must have come from a French film, although the specifics as to why are a bit of a mystery. One such instance is one of the most unique scene transitions I’ve ever seen, where the camera pans up the nude body of Monica Bellucci, and dissolves to footage of the snow-covered countryside, with her breast becoming a mountain and her arm turning into a ridge. It’s a clever bit of cinematic trickery, but it’s stunning in its simplicity and simply the sort of thing you’d never see in an American film. The visual techniques used by director Christophe Gans, particularly in the fight scenes, are equally foreign to American audiences, using kung fu-style martial arts but filmed in a way that maximizes the beauty of the movements, often slipping between slow motion and full speed, lingering on the rain water pouring off of a staff but then taking a moment for a character to make a comedic face. The action feels more like a ballet than what we’re used to in the US, but it still has a grittiness to it as well. And then there’s the somewhat odd spiritual aspect of the film, with a looming crucifix hanging over town juxtaposed with drug-induced visions and Mani’s unique connection to nature. Add in a healthy dosage of sex that would make American studios cringe, and it all combines such that the film constantly keeps you on your toes.

The cast, mostly French with the exception of Bellucci’s Italian prostitute and Mark Dacascos as Mani, bring a very different vibe to the film as well. In particular, Samuel Le Bihan makes Fronsac almost feel like a rock star, with his long blonde hair and his casual manner, so unlike a typical leading man in an historical drama here in the US. Vincent Cassel, who should be more familiar to American audiences from Black Swan and other films, plays Marianne’s brother Jean-François with a leering, unseemly air about him. The rest of the cast is excellent, especially Dacascos, Émilie Dequenne as Marianne, and Jacques Perrin as a young nobleman who joins Fronsac and Mani on their quest and who narrates the film.

I’ve always loved films about France, whether simply as a setting (see tomorrow’s blogathon post about Ratatouille), the subject of the film itself, or simply a small piece of a larger movie, but I’ve long lamented my inexperience with French cinema itself. And I know that Le Pacte des loups, while a fantastic film, is hardly the pinnacle of what France has to offer onscreen. But there are worse places to start your journey to France on film. Brotherhood of the Wolf is a very accessible film, enriched by a knowledge of French history and culture but by no means requiring it. It’s extremely memorable and unique, unlike any other film I’ve ever seen, and though the sort of genre mashup it represents has been tried other places it has never been as successfully executed. It’s exciting, scary, funny, sexy, and above all just an interesting film to watch. And, best of all, it’s a film that feels unmistakably French, despite pulling from so many different forms of storytelling. I can’t imagine this film coming out of any other country, which is perhaps the best compliment I can pay it.