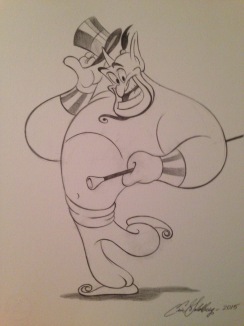 We all have movies we know by heart, that we’ve seen so many times they become akin to comfort food. Perhaps you pop in the DVD when you don’t know what else to watch, or when you’re doing something else and want it to play in the background. When you’ve watched something enough, the experience of watching turns into one of remembering, tuning out the present and filling the time with your memories of the very thing you could be experiencing. Aladdin was one of those films for me which I’d watched so many times I no longer needed a TV; I could just close my eyes and replay it perfectly in my head. (I distinctly remember watching the VHS three times in a row once when I was home sick from school many years ago.) But I recently got the chance to see it on the big screen for the first time in 23 years and it felt like I was seeing it with a fresh set of eyes. Time and experience can change our perspective or deepen our understanding of a film, but we so rarely take the opportunity to come at things from a new angle and recapture the sense of magic that has been softened by familiarity.

As a way to mark the upcoming Blu-ray release of Aladdin, Disney’s D23 fan club allowed people to vote on which cities would get to host a one-time screening, and luckily for me Phoenix was selected (along with Seattle and Sacremento). Tickets to the “Never Had a Friend Like D23” event were free to D23 members, and along with the film we were treated to some exclusive bonus material from the upcoming Blu-ray as well as a special gift. But as an additional surprise treat, Eric Goldberg, the animator for Genie, attended the screening and regaled us with stories of working on the films, listening to Robin Williams’ improvisational work, and bringing the Genie to life. (The other two screenings had Brad Kane, the singing voice for Aladdin, as their special guest.) Goldberg gave us a hint at what being in the recording booth with Robin Williams was like, gave us some anecdotes about dialogue we didn’t get to hear including a funny bit for the opening sequence with a bra, and told us about a new special feature for the Blu-ray of Genie outtakes which he helped assemble from 16 hours of recordings. He also drew a sketch for one lucky moviegoer, and we were informed that our special gift would be an exclusive lithograph of the Genie drawn by Goldberg.

Of course, the main event was the film itself, and it’s remarkable how new something so familiar can feel once you’ve changed the setting. Away from the distractions of home viewing, on the big screen, in the dark, and surrounded by fans excited about the film turns an Aladdin viewing from something commonplace into something special. I was struck by the beauty of of the animation, particularly the gorgeous backgrounds which I had grown to ignore, and the richness of the world the filmmakers had created. The marketplace in particular felt alive, helped by immersive sound design that can’t be captured in your average living room. Most comedies are funnier with a crowd, and many of the jokes we all know by heart once again earned the big laughs they deserve, which grew as the film rolled on and people became more engaged in the experience. (Iago, Abu, and Carpet got many of the biggest laughs.) The musical numbers felt grander and more energetic, much more like a Broadway production than songs we’ve sung along to countless times in the car. The applauded helped hammer this impression home, turning a movie into a show. (It helped that Eric Goldberg told us before the film of how an executive came to him after a test screening to complain that no one had applauded after “Friend Like Me,” leading Goldberg to toss in the Genie’s “Applause” sign.)

For me, however, all of my focus was on the big, blue ball of energy that forever changed the nature of animation and voice performing. I had only watched Aladdin once since Robin Williams’ tragic passing, and that was more as a tribute than an act of enjoyment. Obviously, seeing Genie again on the big screen was going to be an emotional experience, but I wasn’t prepared for the new insight I gained for Robin Williams’ performance. I knew how brilliant, funny, and creative his work as the Genie was from decades of laughing at his jokes, but I don’t think I’d ever fully appreciated the depth of emotion and character he brought to the role. Genie is more than just a funny sidekick to Aladdin, he’s the emotional core of the film. Watching the film I came to realize that Genie’s manic, improvisational flare is a (occasionally literal) smokescreen for the bitterness and loneliness that has built up inside him.

For the first time for me, maybe ever, as I watched the film the jokes, the songs, and the zaniness faded to the background and the Genie’s pain, vulnerability, and complexity as a character shone through. It’s always been there, of course, but after countless viewings I had conditioned myself to mentally and emotionally “tune in” for the film’s high points while glossing over the sections that are actually meatier. It’s there when Genie describes the truth about his enslavement to the lamp, in the frustration at trying to balance unlimited power with the restrictions of his situation. The resentment and isolation peek through the cracks, and it’s not a stretch to imagine the performance the Genie puts on for each master as a way to distract himself from the reality of his life. After an eternity of fulfilling man’s selfish desires, it’s easy to see why Genie would be suspicious of Aladdin’s claim that he’ll free the Genie, and as the film progresses you can see the Genie starting to believe in Al and get his hopes up, only for Al to disappoint him in his fear that he’ll lose Jasmine.

So much of the depth of Genie comes from the phenomenal performance by Robin Williams, but Eric Goldberg’s animation plays a huge role as well. The pain on Genie’s face as he’s forced to obey Jafar’s wishes as Aladdin tries to stop him is just heartbreaking. It’s the look of someone whose hopes have been dashed and who feels like he should have known better, as if there was no other way things could have worked out based on his eons of experience with human nature. It might be human nature to project a bit onto the Genie knowing what we know of Robin Williams’ death, seeing the tragic figure under the happy exterior, but even as written and performed that depth is still there. Which of course makes the Genies ultimate happy ending that much more wonderful, seeing this character’s rollercoaster ride from despair and bitterness to hope to betrayal and even guilt to finally a fate which he hadn’t dared to believe possible. Aladdin and Jasmine’s beautiful romance and search to find a way out of their own trapped lives feels more like the side story compared to that of the Genie.

Beyond Aladdin itself, seeing the film on the big screen with a fresh set of eyes and a new perspective has changed the way I feel about watching classic films with which I’m intimately familiar. I’m going to try to make a point of actively watching these movies that are staples at our home, in the hopes of experiencing them anew. I doubt every film will feel as new and exciting as Aladdin did in this instance, especially given how special was the event surrounding the showing, but I’m going to do my best from here on out to actively engage in what I’m watching, rather than simply letting it roll along in the background. Hopefully it will give me a new appreciation for some of my favorites and heighten the familiar emotions that go along with them.

7 thoughts on “Watching Aladdin with a Fresh Set of Eyes”