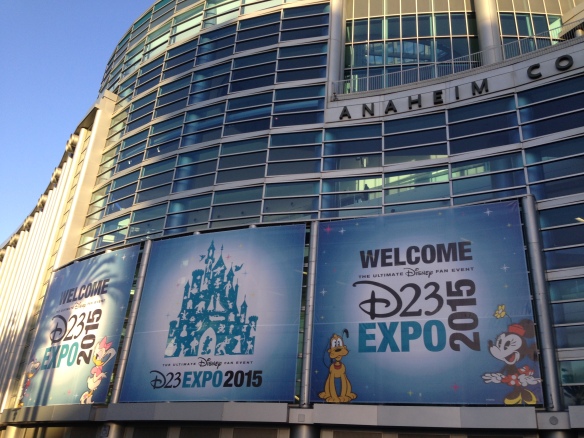 Well, the D23 Expo is over, and what a ride it was! With all of the big movie-related news out of the way with Animation on Day 1 and Live Action on Day 2, today for me was more about getting the full pavilion experience, particularly Walt Disney Archives Presents – Disneyland: The Exhibit, surely one of the ultimate highlights of the Expo. But I also managed to do a (very) little bit of shopping, as well as sitting in on the Disney Interactive presentation featuring news on popular upcoming videogames like Kingdom Hearts 3, Star Wars: Battlefront, and Disney Infinity.

Unlike the previous two events I attended in Hall D23, we were able to keep our phones and cameras out for the presentation, so I live tweeted the presentation with pictures. The big announcements for videogames started with the reveal that the world of Big Hero 6 will be a part of Kingdom Hearts 3, which was a real crowd pleaser. I haven’t played any of the main Kingdom Hearts games, though I have played a couple of the spinoffs and enjoyed them. Despite my lack of familiarity, they’re hugely popular, and I saw a surprising number of cosplayers dressed up as characters from the series. Next was the mobile games division, which despite sounding kind of silly and unimportant has actually produced some solid mobile games that I’m sure are raking in the money. The biggest announcement for mobile was Disney Magic Kingdoms, a new game coming soon based on building your own ideal Disney World resembling the gameplay of many popular mobile city crafting games but with an attention to Disney detail. It also has a story mode about fighting a group of Disney villains that sounded ripped from the pages of the Kingdom Keeper series of books.Star Wars: Battlefront is perhaps the most anticipated upcoming release from Disney, and the EA crafted game looks gorgeous. I wish I had a system on which I could play it. We saw several clips from the game, including a rather terrifying moment where rebel soldiers were ambushed by Darth Vader in a way that felt like a horror movie, plus a glimpse at a new multiplayer mode. The big announcement for D23 was that there will be DLC which ties Battlefront (which takes place during the original trilogy, Episodes IV-VI) into The Force Awakens, and it will surprisingly be free! The Star Wars portion of the event was finished off by wheeling a Star Wars: Battle Pod Premium arcade unit out for everyone to see, with the somewhat insane claim that you can buy one to have in your house. They might be overestimating the spending power of the people in the audience just a bit. A representative from Sony also came out to reveal a Darth Vader Playstation 4 bundle, and to give two of them away to lucky audience members.

What I really wanted to see was Disney Infinity 3.0, and it certainly didn’t disappoint. The game’s producers appeared onstage to talk about some of the upgrades and improvements. They pointed out that the starter pack includes Ahsoka intentionally, as they want to keep a focus on strong female characters in the game. Newly announced was the title for the 3.0 Marvel playset titled Marvel Battlegrounds, which features fighter gameplay a la Mortal Kombat and can support 4 person multiplayer as well as every Marvel character released for the series thus far. They revealed that Disney World Magic Bands will unlock the Partners Statue from the Disney Parks, which is just a small part of the expansive new parks-related content in the game. Four new characters were revealed: Peter Pan (chosen by the Toy Box Summit participants), Spot from The Good Dinosaur, and Judy and Nick from Zootopia. We learned that the ultimate unlock for having all of the figures would be the Keyblade from the Kingdom Hearts series, and keeping with that tie-in we were told that we would all be getting not only the Micky Mouse figure but an exclusive, D23 Expo-only power disc which will turn Mickey into his King Mickey character from Kingdom Hearts. Finally, we were given our first look at the figures for Finn and Rey from The Force Awakens, and John Boyega and Daisy Ridley came out onstage for the moment. They then proceeded to sign the two figures and give them to a couple of cute kids in costume in the audience.

I spent the rest of the day on the show floor, opting to skip the Frozen concert (in which Josh Gad and Kristen Bell made an appearance) in favor of seeing all that I possibly could. I spent more time in pavilions I had breezed through on the previous days, snagging some giveaways in the process. (Seriously, someone is handing something out almost constantly on the show floor, from things as small as bookmarks or rubber bracelets to Lego sets or Funko Pop figures. Being in the right place at the right time, however, is another matter.) My biggest goal was to get into the Disneyland Exhibit, and it was totally worth the hour or more I spent in line.

The Exhibit, presented by the Walt Disney Archives and centered around Disneyland’s 60th anniversary, was full of historical artifacts, interesting stories, pre-construction artwork, ride vehicles, costumes, props, signs and more. I’m going to let the pictures below speak for themselves, but I’ll point out a few of my highlights first. It’s very poignant to see the very first Disneyland ticket ever sold on display, particularly tucked away so innoccuously in a corner of the pavilion. It was really neat to see a selection of ride vehicles side by side and out of context; it really makes you take another look at something you’re so used to being just a part of a larger ride. I geeked out over the Star Tours sign and Captain Rex animatronic. They also had a virtual recreation of the Adventure Thru Inner Space ride which was very popular. Everything had very detailed histories and descriptions, and I completely lost track of how long I was in there, despite it not being as large as you might suspect. 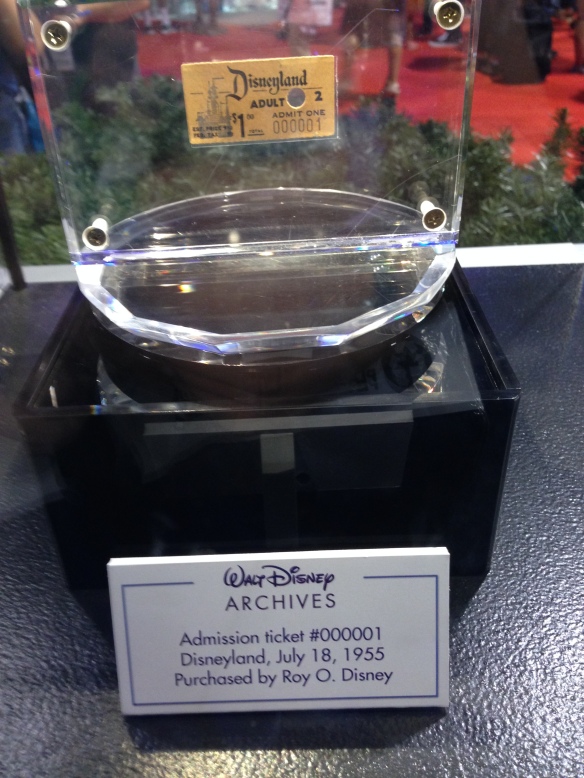 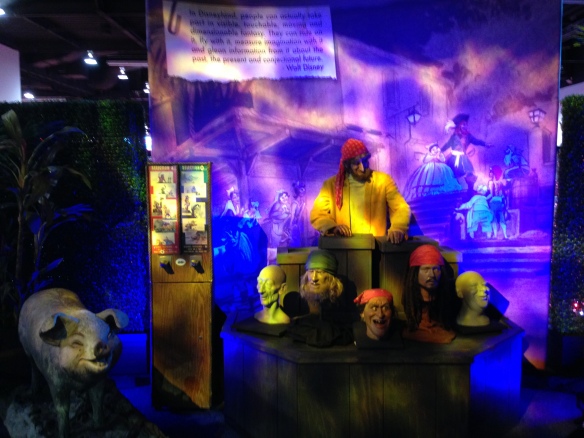 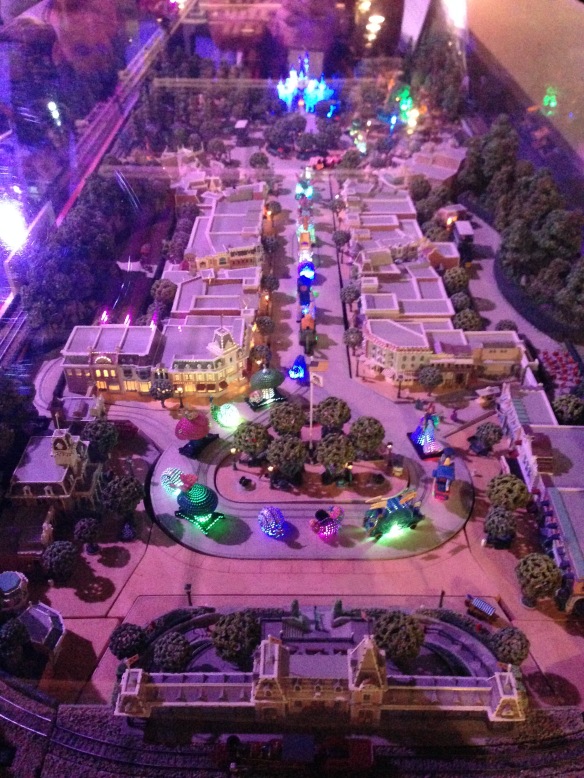 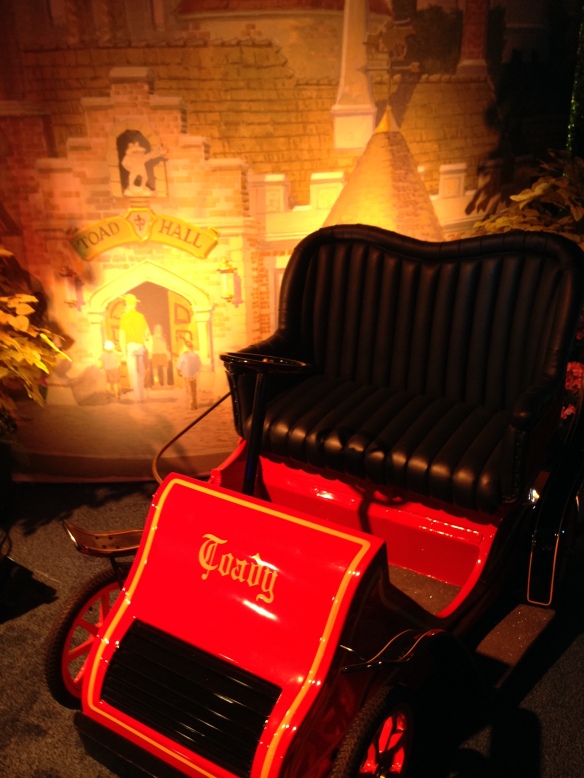 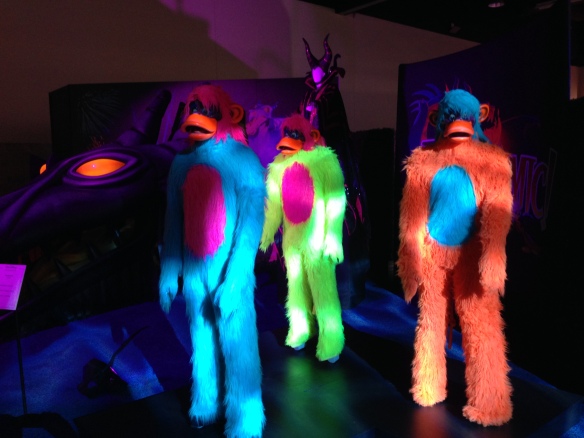 I rounded out my day with a little shopping. D23 Expo has three stores, the Disney Store, the Disney Dream Store, and Mickey’s of Glendale. I managed to get into the Disney Dream store with no wait, because most/all of its exclusive/limited items were already sold out. Still, I managed to find a Star Wars: The Force Awakens shirt I liked as well as a few other nick knacks. The other two stores consistently had two-hour plus lines, and while I technically had the time there was no way I was going to wait in line that long just to shop. The Expo this year had a Storepass option, like a ride Fastpass but for shopping, but even those required you to rush to get in line first thing, as they quickly sold out. There’s a certain class of fan whose only interest is buying as many expensive/limited items as possible (in some cases to sell on eBay), which is totally fine but that sort of attitude makes you miss out on the actual Expo happening around you.

I spent the rest of my time wandering the exhibits and demonstrations, watching some and participating in others. There were plenty of photo opportunities, smaller displays of artwork or production information, and little things to see and do. Every corner of the building was crammed with something worth exploring, but it was also filled with many fun and interesting people worth talking to. There was a large amount of cosplay going on all weekend, but I saw my three favorite pieces today. First up was a girl dressed as Athena from Tomorrowland, my favorite film of the year. Tomorrowland was almost nonexistent at the Expo, but I had many people ask me where I got my pins, and I did find one green screen photo-op that had a Tomorrowland option (for which I was conveniently wearing my Tomorrowland/Plus Ultra shirt). I promise this will be the last picture with me in it. 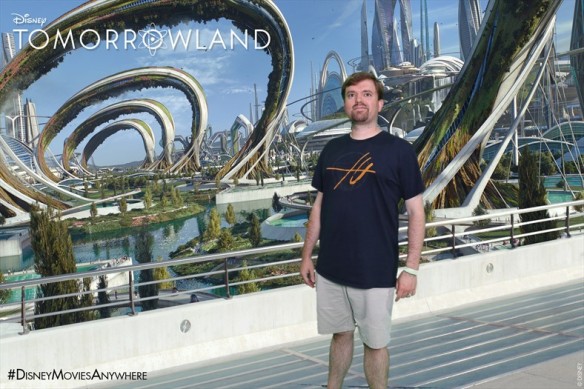 Next was a couple dressed as Yzma and Kronk in their evil lab outfits from The Emperor’s New Groove, one of the funniest Disney films. 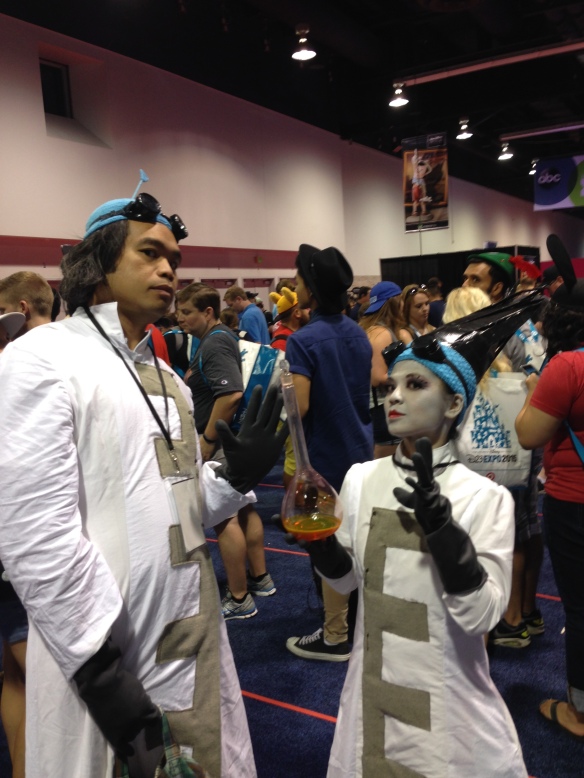 And finally, at the end of the day, I sat on a bench to take a rest because I was exhausted, and it turned out to be perhaps my best decision of the Expo. I had read many articles giving advice for newbies before I came, and they all mentioned how many great friends you’ll make at the Expo, whether in line or simply wandering around. Well with an hour left in the Expo I had made no friends, as most people in the lines were content to merely play on their phones for four hours rather than talking, and those who did want to talk always seemed to be two rows over or just far enough away to make it awkward to try to socialize. But after a few minutes of sitting on this bench, a lady sat down next to me, and we started chatting. It turns out she’s a blogger too (aprilgolightly.com) whom Disney had actually flown to the Expo to cover the goings on. We talked, we commiserated over our aching feet, and by the end were exchanging contact info. But that was only half of what the lucky bench had planned for me, because just as I was getting ready to get back on my feet, the best cosplayer of the Expo went wandering by, dressed as none other than Captain Eo, complete with Fuzzball on his shoulder. Captain Eo is my all-time favorite Disney attraction, and I’ve already related how much Michael Jackson meant to me personally. The guy’s costume was spectacular, with every detail perfect, including the blinking pattern of lights on his jacket. It was a fitting way to close out the weekend, one that I’ll definitely remember forever.

As a final note for this recap, let me point out that I plan on posting a few more D23 Expo related articles soon. First I want to take a broader look at the Expo and my experience with it, particularly looking at things that worked, things that didn’t work, and things I’d like to see for next time. Second, because this was my first Expo, I find that I’m full of suggestions for someone who might be looking to attend the 2017 D23 Expo. A guide for newbies by a newbie, so to speak, and I want to get it written now while things are still fresh in my mind. After that we’ll return to our regular schedule of movie reviews, trailers, and the usual stuff you see here on thelovepirate.net. Thanks for reading!