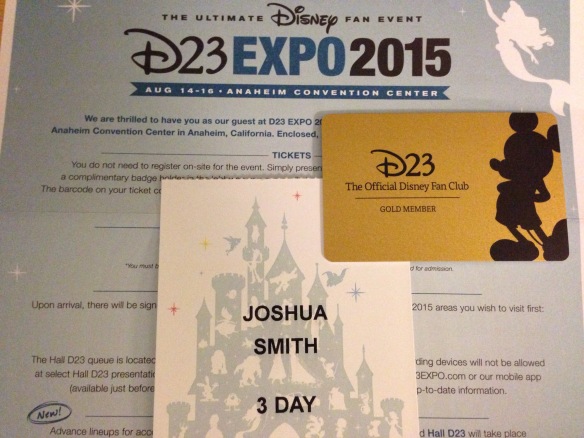 This weekend is the fourth ever D23 Expo, the Disney Convention in Anaheim held every two years, and for the first time I’m going! I’ve been a charter member of D23 (the official Disney fan club) since it started, but I’ve never been able to make it to the Expo until now! I’m incredibly excited, and a little nervous, about all there is to see and do, and my goal is to share it all with you. I plan on tweeting as much as I can, so follow me @lovepirate77, and I may be cross-posting some of that to Tumblr so check me out there as well. I’ll also post nightly recaps of each day’s announcements and activities, with my reactions to any news, sightings, and the experience in general.

This year’s D23 Expo is shaping up to be the biggest yet, with some huge announcements and first looks in store. My goal is to hit most of the “big” presentations, specifically the ones for live action and animated films, as this is a movie-focused blog after all. We should get our first look at Captain America: Civil War, Finding Dory, Moana, Star Wars, Alice Through the Looking Glass, and those are just the things they’ve official announced. I’m hoping for a look at the live-action Beauty and the Beast remake, as well as the new Pirates of the Caribbean film plus a few surprises we know nothing about.

It should also be a big year for Walt Disney World news, and as that’s the place in the world I consider my home I’ll of course hit the Parks and Resorts presentation. We already know about Avatar coming to Animal Kingdom, but the biggest mystery is what will be announced for Disney’s Hollywood Studios park. The rumors all point to a major expansion/renovation to build a Star Wars land, as well as more Pixar based attractions, perhaps with a name change for the park factored in. We also have Shanghai Disneyland opening soon, so I imagine we’ll get some good looks at that as well. The Parks and Resorts event has been one of the consistent letdowns of previous Expos, but I imagine it will be one of the most talked about presentations this year.

But there’s so much more! The Disney Interactive event promises more Disney Infinity figure reveals, as well as info on Kingdom Hearts 3 and Star Wars: Battlefront. There are a myriad of panels throughout the weekend on any topic you can imagine, plus autograph signings, concerts, costume contests, karaoke, and seemingly countless exhibitors. I’m going to try to see as much as I can!

I am, however, fully prepared for the reality that I’ll likely spend a lot of my time in line. The lines at D23 are notoriously bad, and for the big presentations I expect to wait in line for several hours if I want to get a seat. It makes doing everything impossible, but with so much going on that was never a possibility anyway. I’m already stuck with a conundrum for the first day, whether to start out with the Muppets panel or to hit up the Disney Legends ceremony. On the one hand, it’s hard to pass up the Muppets, but at the same time this may be the only chance I have to be in the same room as George Lucas. Going to the major events will limit what I can do, but who knows when I’ll get to go to the D23 Expo again, and I want to be sure to hit the highlights.

Still, I’m mostly excited, with just a little fear/anxiety creeping in around the edges. Disney is one of the most important things in my life, and more than anything I can’t wait to spend three days surrounded by people who love it as much as I do. I’m hoping to make some new friends, see some fun and exciting things, and to have a once-in-a-lifetime experience! And my goal is to share as much as I can with you! The Expo runs Friday-Sunday, so follow me on Twitter for my latest updates throughout the weekend, and look for my nightly recaps! It’s going to be a whirlwind trip, and I’m sure I’ll be exhausted once it’s over, but for now I can’t wait for it to start!

What do you think? Have you ever been to the D23 Expo? Ever been to a convention like this of any kind? Any advice for a convention/Expo newbie? Are you going this year? Even if you’re not, what news are you most excited to hear about? Is the upcoming Marvel slate more interesting to you than the Star Wars universe? How about Pixar? More curious about the Parks or video games? What Disney-related celebrity would you most want to see or perhaps get an autograph from? Let me know in the comments, or on Twitter or Tumblr, and wish me luck!