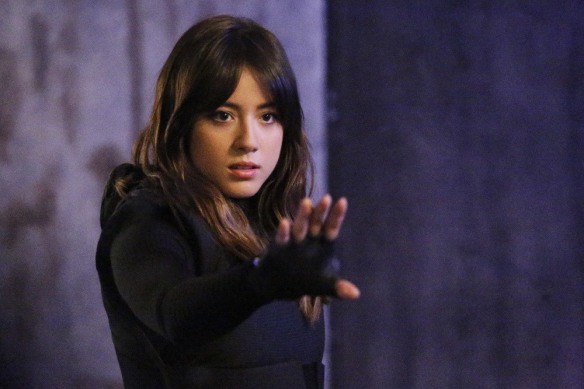 Leading up to the premiere of Avengers: Age of Ultron, SHIELD gave us a big episode which tied into current events in the Marvel Cinematic Universe without losing sight of the progression of the show and its characters.  Last week gave us a tense showdown between HYDRA, Coulson’s team, and Cal/Skye/Lincoln as a result of Ward teaming up with Coulson, and left Mike and Lincoln captives of HYDRA.  This week brought some big changes, including a reunion of our core six characters, some surprisingly dark turns, some of the best action we’ve seen on the show yet, and more than one death.  So let’s jump into “The Dirty Half Dozen,” written by Brent Fletcher and Drew Z. Greenberg and directed by Kevin Tancharoen.

What do you think?  Did you enjoy “The Dirty Half Dozen?”  How did you feel seeing the band back together?  Am I the only one upset that the Bus was destroyed?  How awesome was Skye’s action sequence?  What do you think Gonzales is hiding in his ship?  Does Ward really care about Kara, or anyone other than himself?  What will he get up to now that he’s on his own again?  Would Simmons really have killed him?  Do you think Coulson and May can trust each other again?  For those who have seen Age of Ultron, what did you think, and did watching SHIELD bring anything to the experience?  What do you want to see in the final hours of SHIELD this season?  Let me know in the comments!

1 thought on “Reaction: Agents of SHIELD – “The Dirty Half Dozen””