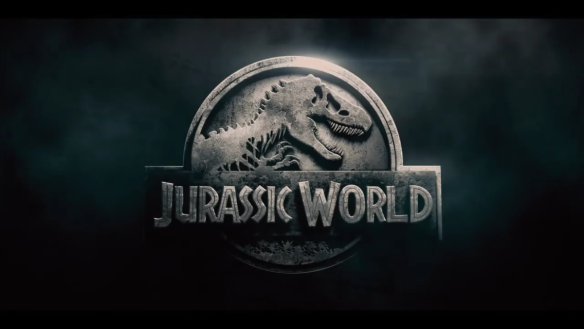 I’ve been sitting on the Jurassic World trailer for a couple months now.  (I actually do this a lot, prepping screencaps of trailers without actually posting them, something I intend to change in 2015.)  In some ways I’m intrigued by it, but in others I’m very wary.  I’ve previously referred to Jurassic Park as the Star Wars of my generation, and to me it’s a cinematic masterpiece, one of the most awe-inspiring films I’ve ever seen.  I love The Lost World, but was pretty disappointed in Jurassic Park III, which was hurt by Spielberg’s lack of involvement.  I didn’t really need another Jurassic Park film, but I was intrigued by the way the script leak for Jurassic World was handled last year.  So when the trailer arrived in November, it stirred up a mix of emotions.  Take a look below and read on for my thoughts:

The trailer opens with a couple sending their kids to Jurassic World, a now functional themepark, fulfilling John Hammond’s dream.  This first part of the trailer is really fantastic, hitting all the right notes by showing us what we’d all imagined a complete park to look like.  There are boatloads of tourists being brought in: 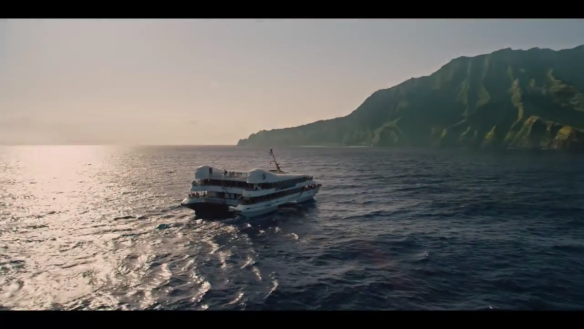 A monorail now runs through the iconic gates (in a shot created just for the trailer, which will apparently be different in the film): 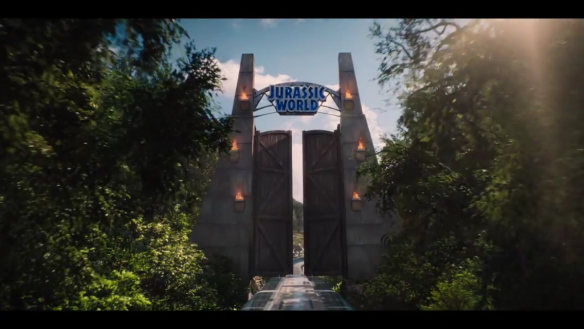 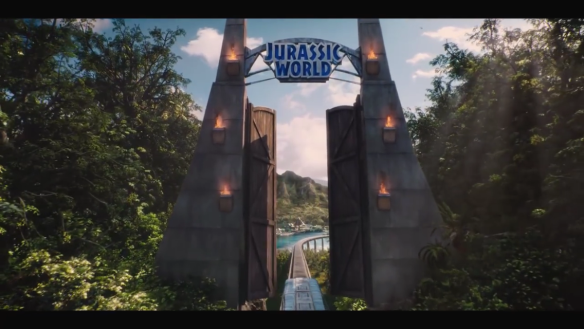 There’s a crowded main street of shops and restaurants: 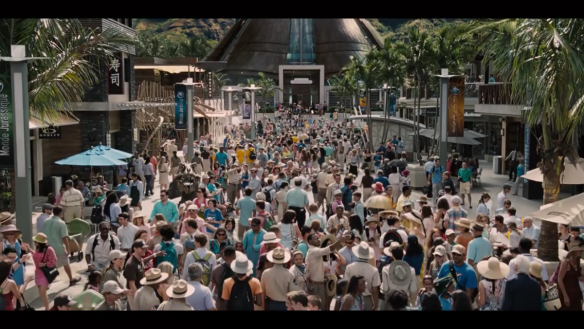 There are a variety of tours/rides/excursions to allow people to view the dinosaurs, including a truck tour through a herd of gallimimus: 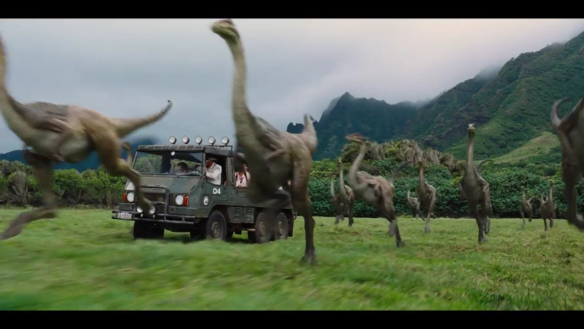 A canoe float next some herbivores, including stegosaurus and brachiosaurus: 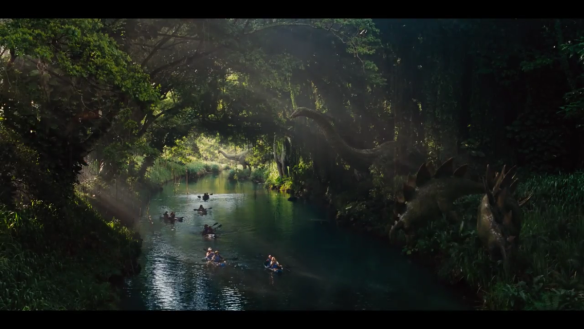 And something called the “Gyrosphere” which lets you pilot a glass bubble across the valley to get right up next to a brachiosaurus: 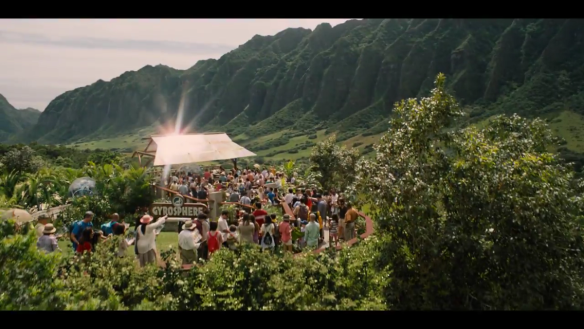 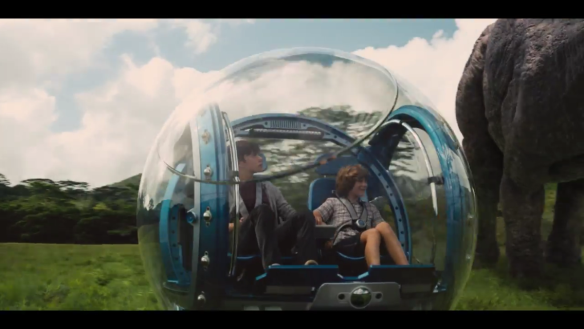 It’s all very cool, and it feels like something Hammond would have dreamt up, but then things take a turn in a way that almost ruined the film’s prospects for me.  We see a large, water-based amphitheater, reminiscent of something like Sea World. 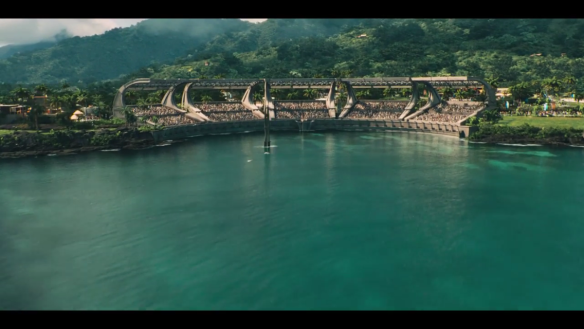 A great white shark (a protected species, by the way) is suspended over the water and a dinosaur, presumably a mosasaurus, breaches out of the water and devours it. 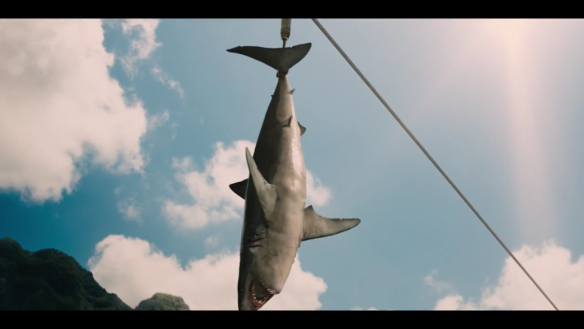 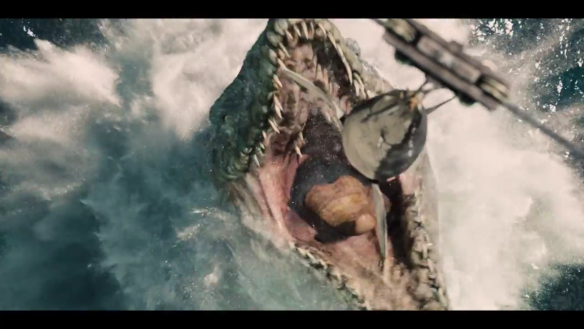 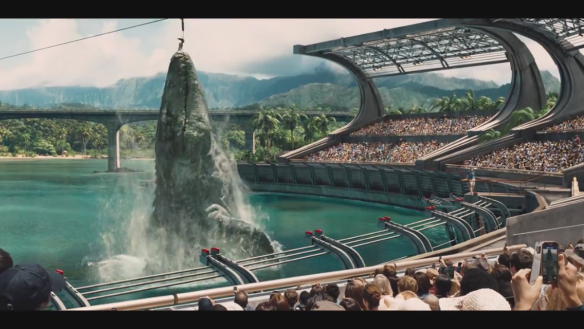 I’m definitely not a fan of this sequence.  While I don’t think the setup is in keeping with Hammond’s view of the park, this sort of attraction could easily be explained away by the owners hoping to add a more exciting feature beyond simply observing the animals in their habitats.  What really bothers me is the insanely inflated size of the dinosaur, and how unrealistic it looks.  The dinosaurs in the series have always been exaggerated or modified to make them work better onscreen (raptors having suffered the most), but this is so far beyond that level that it takes any sense of realism away from the film, and now we’re just watching a monster movie, something Jurassic Park never was.  Not to mention that CG of this scale has to be handled very carefully in order to convince an audience.  If it’s not convincing watching it on my phone, it won’t be convincing on the big screen.

Things continue and we get a look behind the scenes, and the trailer starts to regain my interest.  We meet two park workers, Bryce Dallas Howard as Claire and Chris Pratt as Owen, and we learn that the people behind the scenes have created a “genetically modified hybrid” dinosaur, which Chris Pratt points out was obviously a bad idea. 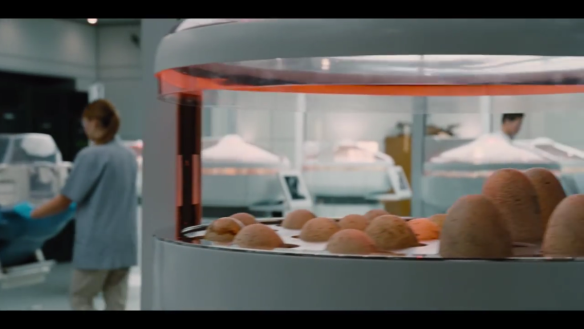 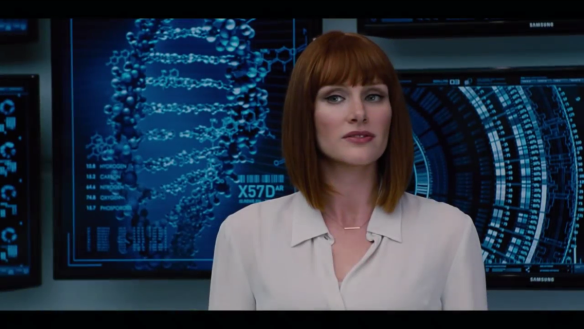 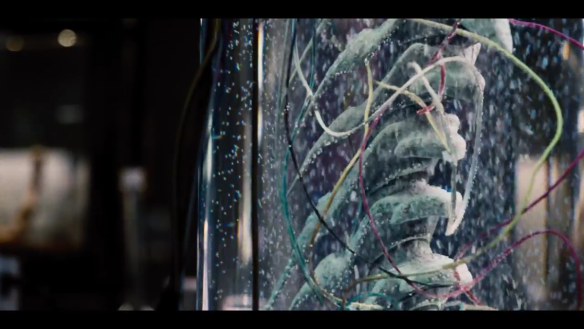 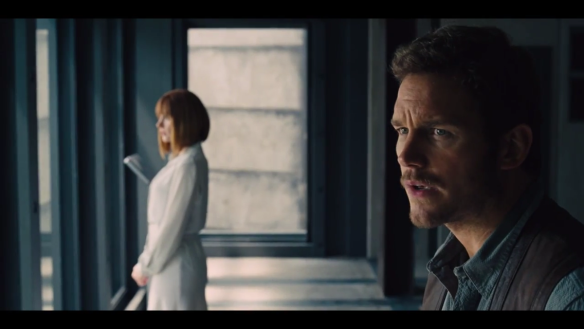 I like the idea of a modified dinosaur, particularly after what we learned following the leak last year, which was created as a way to boost lagging interest in the park.  It speaks very much to the corporate mentality that Ian Malcolm criticized in the first two films, and the idea that they “were so preoccupied with whether or not they could they didn’t stop to think if they should.”  We get glimpses and peaks at this hybrid and the damage it causes, and I’ll be interested to see if they can find a way to balance this new “dinosaur” with the “old dinosaurs” as the destruction starts.  Are we just going to watch this one creation tear things apart, or will its escape lead to the breakdown of the entire park, with all of the supposedly safe dinosaurs on the loose? 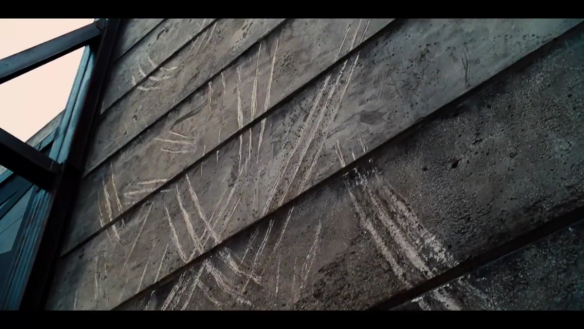 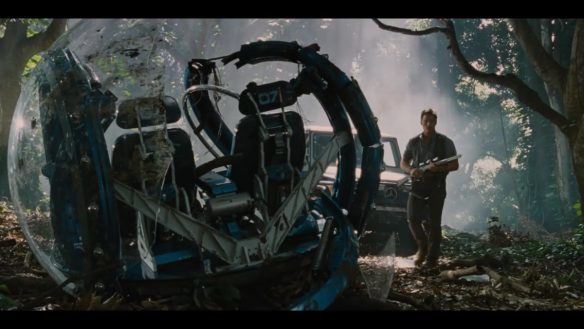 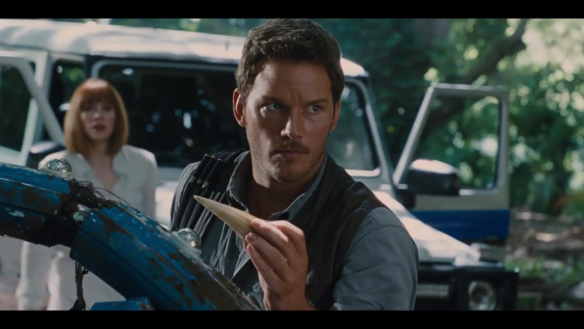 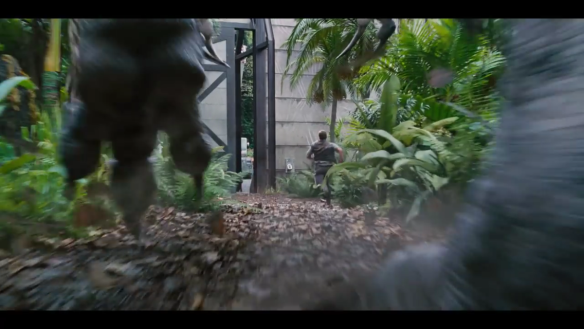 There’s been a lot of speculation about the plot, even from those who haven’t read the leaked script, including the idea that the T-Rex will be the film’s “hero” based partly on the fact that we haven’t seen one yet and the idea of nature overcoming man’s tampering, that Bryce Dallas Howard’s character has some relationship to the kids we see throughout the trailer, but nothing has elicited more speculation than this: 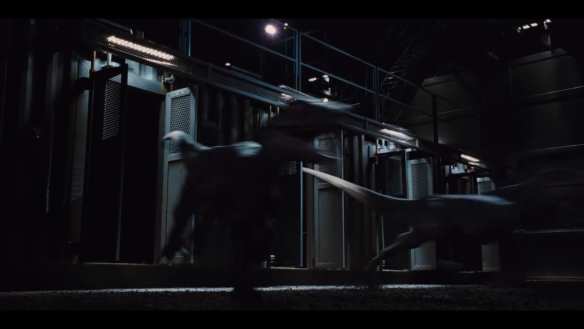 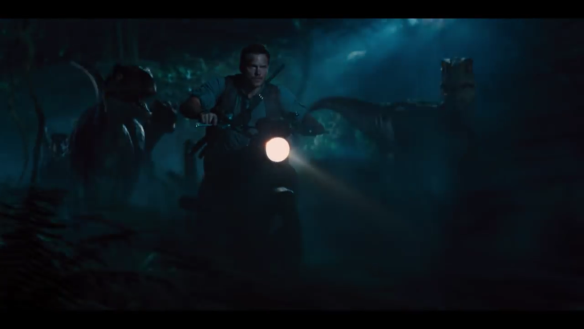 I really hesitate to guess what’s going on here, even though it seems rather obvious.  My first hope was that this was some kind of daredevil attraction at the park, where Chris Pratt rides among raptors a la a lion tamer act, but everyone else thinks that these are some kind of trained raptors.  Some have even gone so far as to say that they might be Pratt’s pets or at least work with him in some way.  If that’s true, that’s ridiculous and could easily ruin the movie for me.

I think there’s still a lot for the series to say about the power and beauty of nature, about mankind’s responsibility for its knowledge and creations, about the unpredictability of life and the futility of trying to control it.  And all of that can be done in a setting that allows nature to fight back against those who try to oppress it, control it, or profit by it, and that gives us some spectacular action and destruction.  I love the idea of a company with god-like power and no scruples, who will do anything to help their bottom line, being brought to its knees by the very creatures it created and thought it understood, despite the warnings of those more in tune with what’s really happening.  And Jurassic World could give us all of that. 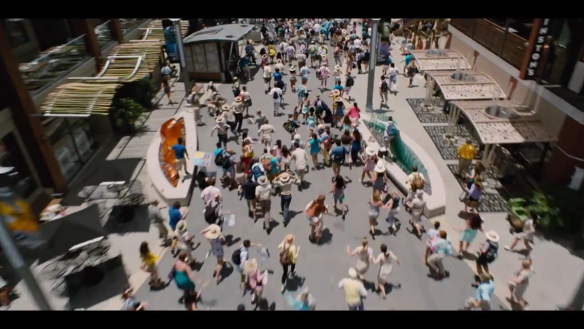 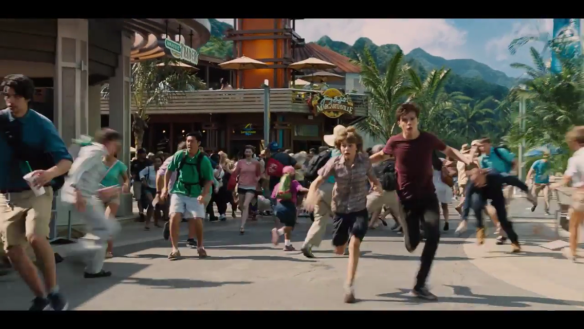 The budget is certainly there to make it happen, and the casting of Pratt and Howard (along with the return of BD Wong as Dr. Wu from the first film) helps the case.  Director Colin Trevorrow has impressed me in some of his interviews, and the fact that Michael Giacchino will be doing the score is a definite bonus if John Williams wasn’t willing to return.  The trailer has some great moments, particularly the opening and the final third.  I like the idea of Howard playing an updated version of the Hammond character, having to face the consequences of her actions in order to save lives (particularly of her family?), but letting her have a bigger role in the action than Hammond could.  But it’s hard for me to get over the giant, silly, B-movie mosasaurus or Pratt’s pet velociraptors. 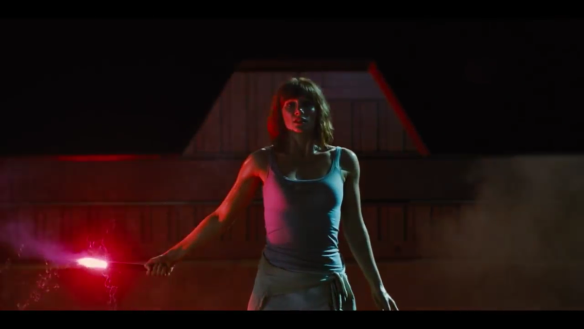 Unlike some other movie sequels, which I might dismiss immediately as being unnecessary, I’m not opposed to more Jurassic Park films.  But if they’re going to do them, I want them to be done right, with the correct attitude.  The haunting piano melody in the trailer helps to assure me that they know what they’re doing, and I’m definitely willing to give it a fair shot, but I’m not going into it with the level of enthusiasm that I carried into Jurassic Park III.  I’ve been burned before, and while I wouldn’t go so far as to say I’m skeptical about Jurassic World, I’m definitely cautious.

What do you think?  Does Jurassic World look interesting to you, or would you rather they leave the series alone?  Is the idea of a fully functional Jurassic Park intriguing?  What do you think about a genetically modified hybrid dinosaur?  What do you make of the giant mosasaurus?  How about the velociraptors?  Do you like the casting of Pratt and Howard?  Where is the T-Rex?  If you could have brought back one (surviving) character from the previous films, who would it be?  Let me know in the comments!