After saying last week that I rarely do TV trailers, here I am again with another one, although this one is much more exciting.  After Disney bought Lucasfilm and the rights to Star Wars, many people wondered what would happen to the wildly successful animated series, The Clone Wars, which aired on Cartoon Network.  The somewhat disappointing but unsurprising answer is that The Clone Wars was brought to a conclusion, and a new animated series was announced, Star Wars Rebels, which will air on Disney XD in the fall.  The trailer premiered this weekend on “Star Wars Day,” although it’s probably been a little eclipsed by other recent Star Wars news.  Take a look and read on for my thoughts below:

Unlike The Clone Wars, which took place between Attack of the Clones and Revenge of the Sith, Rebels takes place just 5 years before A New Hope.  It opens with a sequence that feels like it could have come right out of the original trilogy, where we see a rebel ship fleeing from the Empire. 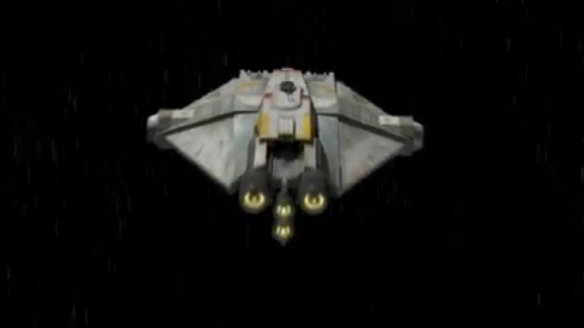 I’m going to take things a little out of order here, but that ship, the Ghost, houses a motley crew of rebels who aim to make life miserable for the Empire.  The crew is led by Kanan Jarrus (voiced by Freddie Prinze, Jr.).  He’s joined by Zeb Orrelios, the group’s muscle, and Sabine Wren, an explosives expert with a familiar-looking set of armor.

The Ghost is owned and piloted by Hera Syndulla, who also owns the ship’s irritable astromech droid, Chopper (C1-10P). 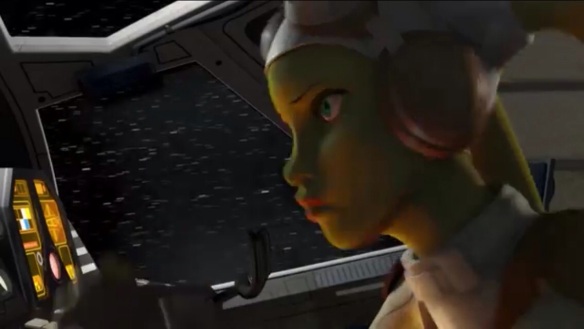 Also, at the beginning of our story, this band of rebels takes in a teenage con artist and thief named Ezra Bridger.  This ragtag band of unlikely heroes fits the a mold we’ve seen countless times in countless stories, particularly in science fiction.  Obviously they have a similarity to our original band of Star Wars heroes (Luke, Han, Leia, Chewie, R2 and 3PO), but they’ve also got more than a little in common with the crew of the Serenity.  “Who are you guys,” Ezra asks, to which they reply, “We’re a team.”

The trailer’s a little short to get a real handle on the show’s overall plot, but at the same time there’s only so much you can give away from a 30 minute show.  We get some good action sequences, including a nifty fight in zero gravity, which shows our team taking on some Stormtroopers. 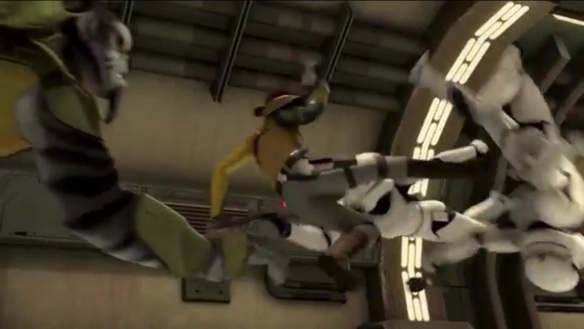 There’s some dogfighting with the Ghost on the run from TIE fighters, as well as a funny moment when a Stormtrooper leans in to check out a device (probably left by Sabine) only to be blown up. 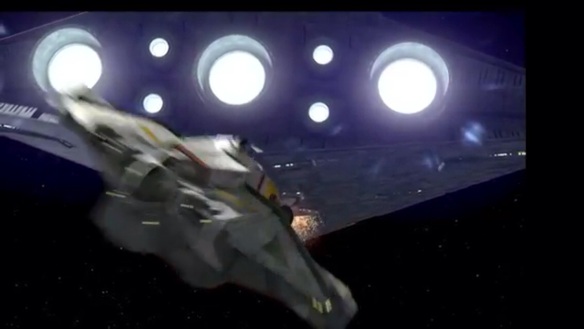 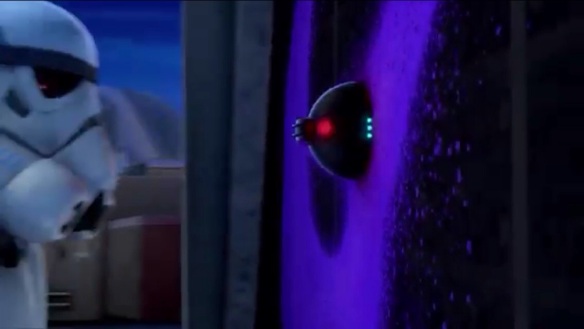 The animation looks very pretty, particularly with lighting or in space.  As always, the animation style of the characters will be a divisive issue, but the animation in general looks impressive.

There are some familiar sights for fans of the original trilogy, including lots of Stormtroopers and Star Destroyers. 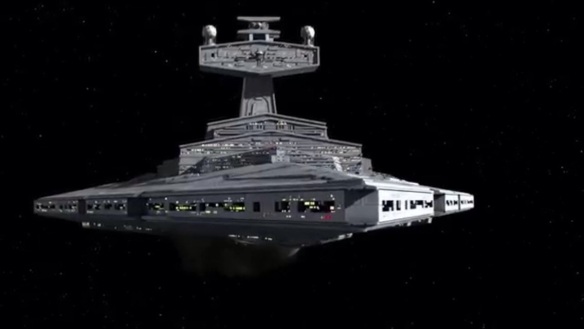 The really interesting bit is saved for the end, however.  As the Ghost is trying to escape, an Imperial officer orders his stormtroopers to open fire on Kanan Jarrus.

Jarrus, however, pulls out something that they’re not expecting.

That’s right, Jarrus is secretly a Jedi.  How he survived Order 66 will obviously be a big question that the show will have to answer, but it’ll be interesting to see if his crew knew about his past, and how they’ll react if they didn’t.

After they escape, the officer reports back to a mysterious figure via hologram.  Thus we get our first look at the Inquisitor, one of the show’s main villains, who was charged with hunting down escaped Jedi by Darth Vader. 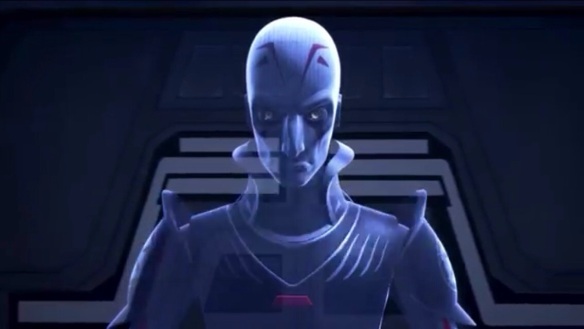 From the interviews I’ve read, Star Wars Rebels will have a different tone than The Clone Wars, which has become famous for its deep and occasionally dark explorations of its characters.  While Rebels will still have depth to it, it’s been designed as a more “fun” show, meaning a heavier focus on action/adventure and humor.  This will bring it more in line with the flavor of the original trilogy (and presumably the new films), leaving behind the politics and the introspection of the prequel trilogy.

I’m ashamed to say I never really got into The Clone Wars.  I saw the film that came out in theaters, and I have two seasons on Blu-ray (which I haven’t watched), but I never really sat down to watch it.  Partly, I missed so much when it first started that I didn’t want to watch without catching up, but mainly I was dubious about the quality of a Star Wars animated show.  Of course, by now I’ve read countless articles and reviews that have pointed out how fantastic the show was, and I fully intend to watch it eventually.  For now, however, I’m determined not to miss Star Wars Rebels.  It looks like some good, old-fashioned Star Wars fun, and I can’t wait until the fall.

What do you think?  Are you looking forward to Star Wars Rebels?  Are you a fan of The Clone Wars?  What do you think of the look and design of the new show?  Are you happy to see Star Wars animation that feels more like the original trilogy?  Was it inevitable that we’d get a show on one of Disney’s TV channels?  Do you think we’ll ever get that live-action show that George Lucas was working on?  Let me know in the comments!