Welcome to “Trailer Tuesday” where I talk about trailers for upcoming movies, since I’ve always found trailers to be endlessly fascinating.

Back in August we got our first look at the film version of Divergent in the form of a teaser trailer.  In the past couple of weeks, a newer, longer version of that trailer has appeared, hitting many of the same beats as the teaser, but with extended looks into the world of Veronica Roth’s books (the trilogy recently came to its conclusion with Allegiant).  Take a look, and read on for my thoughts:

This trailer gives us the same narration from Jeanine Matthews (Kate Winslet) that we heard in the previous one, including her line “The future belongs to those who know where they belong.”  There’s still not a lot of explanation for the casual viewer, but the opening moments of the trailer give us a hint of that world.

Divergent is set in a dystopian future version of Chicago

Jeanine Matthews standing in front of the bowls representing each of the factions, to which the 16 year olds will have to add their blood once they’ve decided on a faction.

The Dauntless recklessly jump from the moving train as they arrive each day for school.

The children are separated by the faction into which they were born, each with a different color and style of dress.

The 16 year olds, Tris (Shailene Woodley) among them, are told they will be given a test which will help determine the faction in which they belong.  Tris discovers during her test that she is Divergent, meaning that she doesn’t belong to any faction (or, conversely, that she has a place in all of them).  This makes her dangerous, because she represents a threat to the system.  We get a glimpse of her aptitude test, administered by Maggie Q’s Tori, but interestingly what we see inside her test is from later in the story, when Tris faces her “fear landscape” at Dauntless.  She is in a glass cube filling with water, but realizes that the simulation is not real and fights it.  You’ll notice she’s wearing Dauntless clothing in the clip, not the grey Abnegation in which she begins the story.

Not the Aptitude Test

We get the same sequence of her initial jump into Dauntless, a defining moment for Tris, and then we’re introduced to Four (Theo James), who has a bigger role in the trailer than our protagonist.  He instructs Tris and the other initiates on Dauntless training, and tells Tris that he recognizes that she is Divergent.  He confesses to her that being in one faction isn’t enough for him, and that he values the ideals of each of the factions, showing off his tattoos of each of the faction symbols. 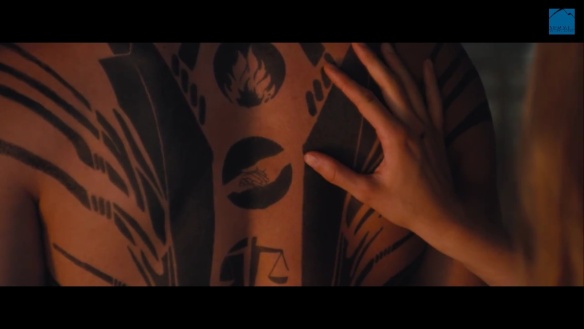 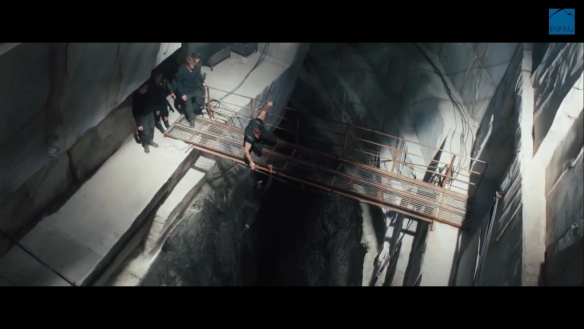 The final section of the trailer gives us a quick series of clips hinting at the conflict to come.  We get images of Dauntless soldiers gearing up for action, some big character moments, and some sparks of romance between Tris and Four.

Tris and Four boarding the train 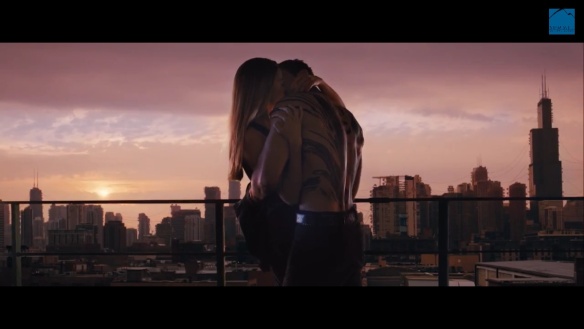 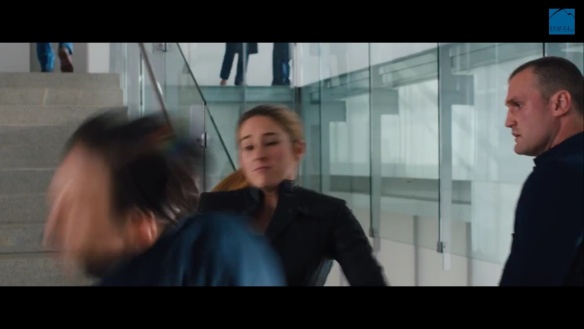 The final moment of the trailer is one that anyone who has read the book will recognize.  It’s a big step for Tris, as she rides a zipline from a skyscraper in Chicago.  The virtue that Dauntless values is bravery, and it’s a defining moment when Tris conquers her fears and jumps.

What do you think?  Did you like the longer look we got from this trailer?  How is Divergent shaping up when compared with your expectations?  Do you think Woodley will make a good Tris?  What about the look and style of the film?  Did you notice Ashely Judd as Tris’s mom, Natalie, at the beginning?  Do you wish that the trailers would do a better job explaining the factions for audiences who haven’t read the books?  Let me know in the comments!